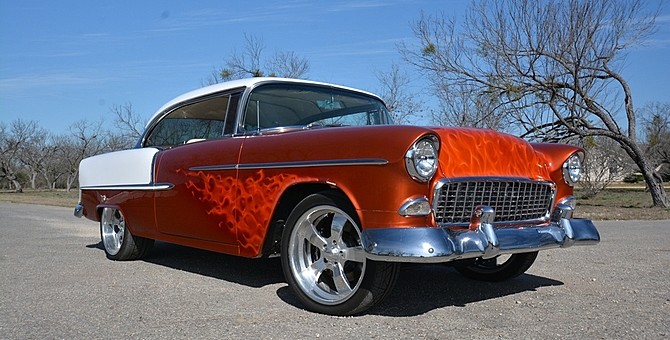 While the listing itself doesn’t say much about the history of the vehicle or detail much of the work that’s been done, we can glean a bit about the vehicle from what we can see: It’s a 1955 Chevrolet Bel-Air with a two-tone copper on white body, tan interior and fairly stock looking sheet-metal.

The front end has been tidied-up ever so slightly and flames lick the grill and wheel-wells. Other than that, this ’55 does most of its talking with what’s under the hood: an LS7 that’s been fettled by ‘Texas Speed’ to produce a whopping 630 hp.

Body aside, there’s a whole lot more goin’ on under the metal:

Packing a crate engine that’s worth more than $16,000 alone, we’d wager a bet that the owner is hoping their LS7-powered ’55 won’t cross the block for anything less than $75,000. Hazard that as a wild, wild guess.

With that in mind, what size check would you cut for this 630 hp Tri-Five?