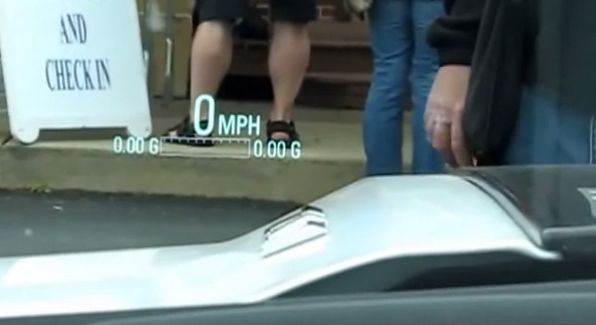 Head-Up Displays (HUDs) are hardly new technology; the first production HUD was available some decades ago in 1988 as an option on the Oldsmobile Cutlass Supreme Convertible Indy 500 Pace Car. Four years later, the technology would become standard on the Pontiac Bonneville SSEi.

Despite this, HUD technology is still relatively new to consumers, a seemingly newfangled, possibly superfluous system that still has yet to make its way into widespread use. But the HUD holds a lot of promise for reducing the amount of time the driver’s eyes are off the road, and therefore cutting down on accident rates.

Here is how General Motors is working to make its HUD feature more useful:

While the HUD is certainly capable of outright replacing a traditional gauge cluster, clutter is a concern for the design team. Therefore, the HUD is restricted in what information it will convey at any given time: navigation, audio information, a tachometer, or a speed readout can each be selected to occupy the HUD space.

Designers must skirt the line between a HUD that is too large and obtrusive, and one that is too small and illegible. That means using fine, yet discernible lines on every display, and so-called “grotesque” fonts – or those where each letter is immediately distinct. This enables them to minimize the HUD’s space on the windscreen, while not rendering the display difficult to read.

GM’s modern HUDs use a full-color screen, meaning that designers have their options with regard to finding hues that are easily readable against any background. White is the brightest – and therefore, standard – shade for most displays, but the design team had to conduct testing to find a hue which would stand out against snow.

Information shown by the HUD is redundant by nature, but that doesn’t mean that notifications are addressed separately from the primary displays. Dismissing or addressing a notification at one place in the information system does the same for any HUD notifications, and controls specific to the Head-Up Display tend to center on visual adjustments so that there is minimal finicking.