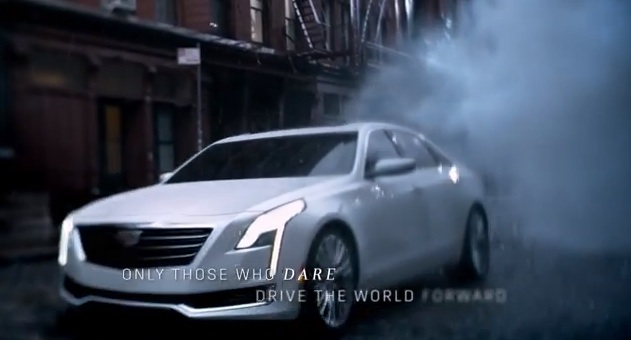 The 2016 Cadillac CT6 is days away from showing face to the public, and has been a tight kept secret besides its quick placement in Cadillac’s “Dare Greatly” ad campaign. Although details have trickled out little by little, one thing we’ve known for a long time is what the car rides on.

Underpinning the 2016 Cadillac CT6 is General Motors’ Omega platform, the latest from GM for full-size, rear-wheel drive applications. The platform supports a longitudinal engine placement, and may also see a full-size Cadillac crossover come of it, and even a Buick flagship, via Avenir. The most important aspect of Omega, though, is its material usage.

Omega benefits from a largely aluminum base, cutting weight down substantially, and other materials such as magnesium only tip the scales further in fuel economy’s favor. This is an important matter because, as Reuters points out, automakers are under major pressure to increase fuel economy amid tighter regulations from countries globally.

But, things got a tad complicated. Fuel prices have dropped substantially over the past year, and Americans are no longer shelling out nearly $4 a gallon to fill up their vehicles. This has shown an incredible demand for larger vehicles once again, sedans and SUVs alike. Now, it’s up to the engineering department to sort out how to deliver large, full-size vehicles without the heft dragging down fuel economy.

The CT6, and the Omega platform, will be the largest use of aluminum, steel, magnesium and other inputs to date from General Motors in an attempt to deliver a large, spacious vehicle, without added weight to meet the upcoming stringent fuel economy standards. No one says it’s going to fail. In fact, it’s believed Omega is an extended version of GM’s Alpha platform. And we love what Alpha has brought thus far.

With the coming of CT6, Travis Hester, CT6 Head Engineer, has been quoted on the record saying Omega is being studied for application in at least four other future vehicle architectures. The savings could be huge, especially when knowing the platform supports not only cars, but SUVs too. Furthering those savings is the ability to toss out costly metal-forming dies, and replacing them with one casting.

Not only does Omega use these state-of-the-art materials, but it uses them in an educated manner. Again, Hester explains saying steel was used around the passenger compartment, foregoing aluminum. Why? Because high-strength steel is not only safer, but creates a better barrier from outside noises, so you’d best believe the CT6 will be a quiet cruiser.

We’ll have a tidal wave of information coming your way on the 2016 Cadillac CT6 in the coming days, but looking passed the pretty face and loaded features, the most important piece of the car may actually be the mere building blocks its derived from.