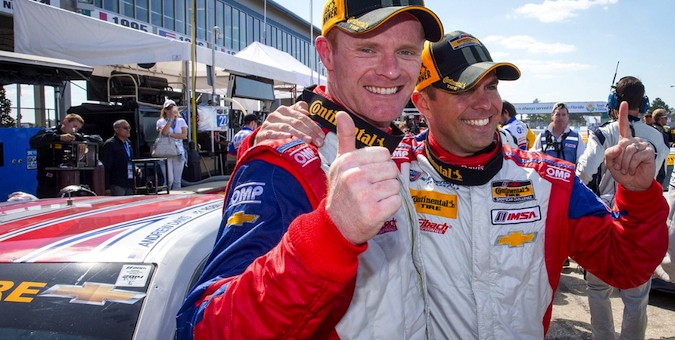 Chevrolet was happy with the way this past weekend was going even before they had swept the podium for the Mobil 1 12 Hours of Sebring and taken home a GTLM class victory. That’s because their Camaro Z/28.R managed to win the Continental Tire SportsCar Challenge race at the track on Saturday, repeating its race-winning performance at the track in 2014.

“Last year was our maiden win for the new Camaro, and it was a bit of a surprise,” Davis told RACER. “It gave us confidence and we catapulted from there. We won a few more races and contended for the championship. Our Camaro was flawless for the whole race.”

A green flag pit stop with just under an hour left in the race proved to be the podium decider. Davis pitted first, putting Lidell in the No. 6 car for the remaining laps. Bell pitted after, handing driving duties of the No. 9 over to Aschenbach. He was able to close on the No. 6, but was unable to catch his teammate in time for the checker flag.

In behind the two Camaros were brothers Matt and Hugh Plumb in their No. 13 Rum Bum Porsche 911, which won the season opening Daytona race in January. In behind them was Martin Barkley, driver for the other Camaro Z/28.R team, Ontario, Canada-based Mantella Autosport, and Nick McMillen in the No. 41 Doran Racing Nismo GT Academy Nissan 370Z.