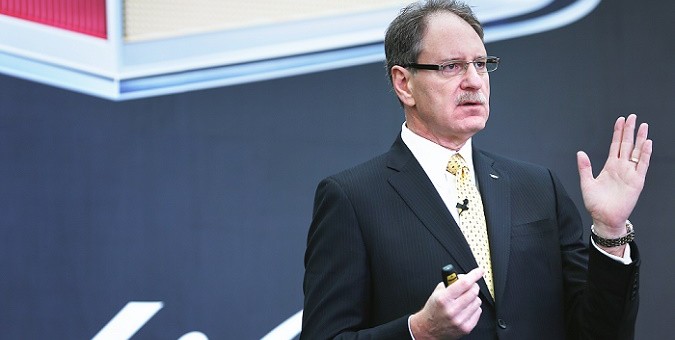 If there is one thing that has been said by all of us here at GM Authority, it’s that Cadillac should not play follow the leader with the Germans. It seems Cadillac head-honcho Johan de Nysschen shares our view, and spills his thoughts to Kelley Blue Book during a brief question and answer session.

KBB had the chance to sit down with de Nysschen and it has become clear through his words, he wants Cadillac to have a true global relevance. Rather than leveraging familiarity with the American buying public, he wants the luxury brand’s renaissance to be global. That means not only creating a new generation of Cadillac buyers in the U.S., but crafting a tempting proposition in European, Middle Eastern and Asian markets.

When asked about the brand’s approach, de Nysschen stuck to what he feels will create the brightest future for Cadillac, saying:

It’s generally regarded that Cadillac is offering some of the greatest product it has ever produced, on par with German and Japanese competition, if not better. The newest vehicles trade comfort and floaty feelings for razor sharp chassis, and edgy styling. And that’s great, it makes for an incredible product. The challenge will be whether Cadillac leaves its current loyal customer base behind for the greater being of the brand. Which, as KBB points out, puts Cadillac in an automotive “no-man’s land.”

When KBB asked de Nysschen regarding its current loyal customers, and where he plans to take the brand, he had this to say:

“That is precisely at the core of our current operational challenge, precisely at the core,” he said. “When the decision was made to evolve Cadillac from plushmobiles to putting real credibility back into the product substance, they [his GM colleagues] …really focused on driving dynamics, and that is where CTS and now ATS have come to the fore. These cars have to be an important part of the marketing communication and the repositioning of Cadillac in the future. Our problem is this: a large part of our current customer base is still rooted in the previous direction for the brand.”

de Nysschen rounds out his thoughts by highlighting how he intends to keep a distinct American flavor to the luxury brand, and doesn’t intend to sit back and copy European luxury vehicles, something he says will be evident on the upcoming CT6. Sounds awfully like the “Dare Greatly” message, no?

We like it. Every time we hear de Nysschen speak, we like what we hear. The next course of judging Cadillac’s resurgence will be the CT6. Until then, we will keep the faith. Have a look at the entire interview with de Nysschen, here.