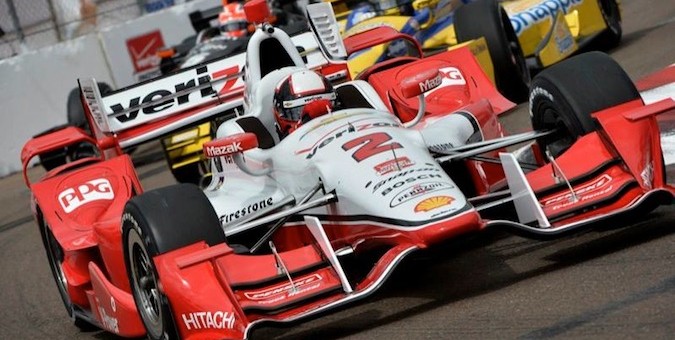 In a rather unsurprising turn of events, Team Penske and Chevrolet dominated the 2015 Verizon IndyCar season opener in St. Petersburg Sunday. Juan Pablo Montoya drove his Chevy-powered Penske car to a win while his teammates slotted in behind him in second, fourth and fifth.

Penske’s weekend started off strong when their four drivers qualified 1-2-3-4, taking up the first two rows of the starting grid. Montoya quickly dropped back to fifth place after the green flag flew, but slowly worked his way back to second and took the lead after a slow pit stop from race leader Will Power.

Montoya built a solid 3.8 second lead, but Power was slowly beginning to catch him. Late in the final 30 lap stint, Power made his move, attempting to overtake Montoya going into Turn 10 at the end of the back straight. Montoya blocked him in a nerve-racking moment for the Team Penske bosses and ultimately won the race 0.993 seconds ahead of Power.

The next round of the Verizon IndyCar series, the GP of Louisiana, will kick off on April 12. Team Penske will looking to continue their success going forward, with the team expecting their four drivers to be battling it out for this year’s driver’s championship.