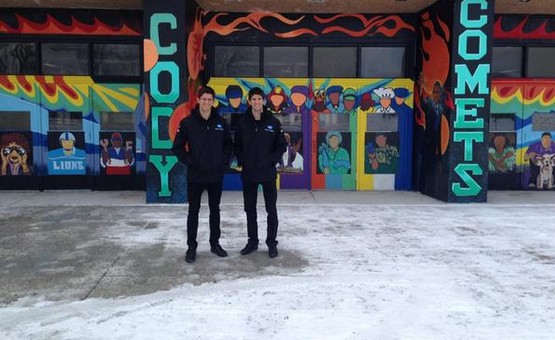 Brothers Jordan and Ricky Taylor, who drive a Corvette DP in IMSA’s Tudor United Sportscar Championship, are currently in Detroit making the rounds to different media outlets and promotional events for this year’s Detroit Belle Isle Grand Prix. In between speaking to journalists and promoting the race, the Wayne Taylor Racing brothers found time to answer students’ questions at Cody High School in Detroit, The Detroit Free Press reports.

What can two racing drivers teach a bunch of high school kids? Well, in Cody High’s case, quite a lot. The technology prep school is participating in the Innovative Vehicle Design Performance Challenge on May 23 at Belle Isle, which will pit their specially designed race buggy against 20 other student-built vehicles. The driver will be Cody High senior Cordon Holland-Thomas, who received tips from Ricky, one of the best sports car drivers around.

“Keep it smooth and avoid the bumps,” Ricky advised the 17-year old Holland-Thomas. “At all costs, keep it off the wall.”

The competition is run by the Great Lakes region Square One Education Network, a nonprofit that looks to provide funding to schools in order to include more science, technology, engineering and mathematics (STEM) in their curriculum. Holland-Thomas says he’s “really excited” to race at Belle Isle, but hopes they can get the car running before race time in May.

Teachers like Chad Segrist oversaw the design and build process of Cody’s buggy. They raced it at Michigan international Speedway in a similar event last year, the Free Press says, but they’ve switched out the gasoline engine for an electric one for the Belle Isle race. Like Holland-Thomas, Segrist is hoping they can get the car running in time.

“This is about students working together,” he said. “It didn’t run at first either at MIS, but the kids worked it out. That’s what is great about this program.”

The Cody High kids may even be able to see Jordan and Ricky in their Corvette DP at Belle Isle. Comerica Bank president Michael T. Ritchie announced the return of “Free Prix Day” at Belle Isle during the Taylor’s visit, allowing race fans to watch the races from the grandstands and pit paddock for free.