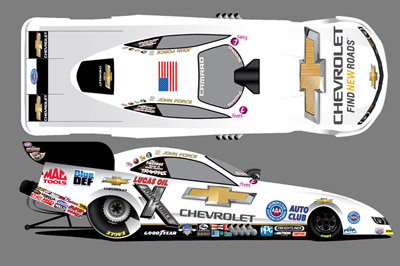 Sixteen-time NHRA Funny Car champion John Force has debuted his new 2015 Chevrolet Camaro SS livery ahead of the Four-Wide Nationals at zMax Dragway in Charlotte, North Carolina. Chevrolet will serve as the car’s main sponsor, with a large gold bowtie emblazoned across the hood, but sponsors Peak Anti-freeze & Coolant, BlueDef, Auto Club, Traxxas, Lucas Oil and Mac Tools will also be featured on the car prominently.

Force is no stranger to the NHRA Four-Wide Nationals. He participated in the series’ first-ever four wide exhibition race back in 2009, a heat he lost to then teammate Mike Neff. Not long after the defeat, he won the first-ever Four-Wide Nationals, beating out daughter Ashley Force Hood for the win. Last year, Force made it to the final round of the Four Wide Nationals and finished second to teammate Robert Hight.

“I am excited to be racing this Chevrolet-branded Camaro SS Funny Car this weekend,” Force said in a statement. “This season we will have a number of different looks on my Funny Car and it is all about keeping the sponsors happy.”

“I’ll have a new Chevrolet fire suit and helmet this weekend, too. We started the season with Peak and they will be back for most of races. I am talking with some other companies about coming on board later this season. This weekend will be about promoting Chevrolet and all our sponsors, of course,” added Force.

“Bruton Smith built us the Bellagio of drag strips and over the off-season they resurfaced the race track. I bet it will be even better for the Four-Wides,” he said.