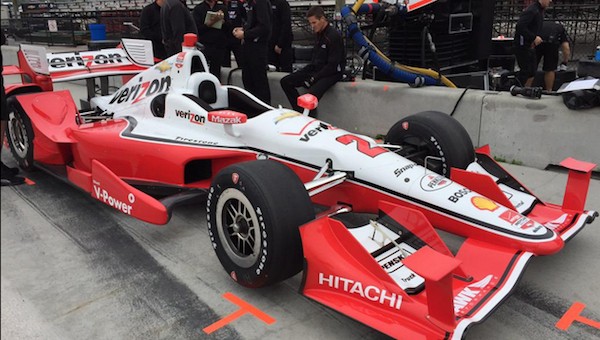 IndyCar race cars sporting Chevrolet’s new road/street course and short oval aero kit for the 2015 season completed tests at NOLA Motorsports Park in Louisiana this past Saturday, RACER reports. The tests, which come one week before IndyCar’s open tests at Barber Motorsports park, marked the first time the newly designed Honda and Chevy cars were together on the track at the same time.

Scott Dixon posted the fastest time of the day in his Chip Ganassi Racing Chevrolet, lapping NOLA in 1:18.140. He narrowly edged out the Chevrolet of reigning series champion Will Power, who posted a 1:18.195, and of Juan Pablo Montoya, who was the third fastest driver of the day at 1:18.298.

Graham Rahal was the fastest Honda driver during the tests, posting the fourth quickest time overall, a 1:18.353. It appears the Chevys may have an early advantage come race season, however the top bowtie drivers made a second run on new tires towards the end of the practice session while Rahal and Hunter-Reay didn’t, RACER notes. This could have meant the difference between the Hondas being on top vs. the Chevrolets, so it’s hard to tell who will be running faster when race season rears its head.

IndyCar’s first official pre-season test starts today and will carry through to tomorrow at Barber Motorsports Park in Leeds, Alabama. In addition to the aero kits, the teams are also trying out a new device during the test which displays the position the car is in, similar to TUDOR. If everything goes to plan, the devices will be on the car’s for their debut at Indianapolis on May 24.