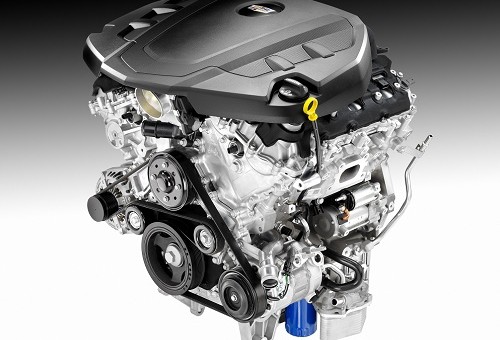 In addition to announcing the new 3.0-liter twin-turbo 400 horsepower V6 LGW engine today, Cadillac also announced a new naturally-aspired 3.6 V6 to be employed in the CTS, ATS and the yet-to-be-revealed CT6. Assigned production code LGX, the new 3.6-liter motor is part of GM’s fourth-generation DOHC V6 engine family and utilizes cylinder deactivation and stop/start technology in order to deliver enhanced fuel economy over the outgoing 3.6L LFX. After rolling out for Cadillacs, the LGX will likely become available in other GM vehicles — possibly the 2016 Chevrolet Camaro.

The new 3.6-liter LGX engine, which is a clean-sheet design and shares very little with GM’s current 3.6L V6 LFX engine, delivers an SAE certified 335 horsepower and 284 pound-feet of torque. It retains the aluminum deep-skirt cylinder block of the LFX mill, however the bore has been enlarged from 94mm to 95mm and the bore centers have grown from 103mm to 106mm. There’s also an all-new cylinder head design, a forged steel crankshaft, high-strength connecting rods and pistons and oil-spray piston cooling.

The cylinder deactivation and active fuel management systems, all new for the fourth-gen V6 family, contribute to a 9 percent increase in efficiency over the previous engine. Cylinder deactivation powers down the engine’s No. 2 and No. 5 cylinders in light-load driving conditions, while the start/stop system will shut the engine off completely when it’s stopped and automatically turn it back on when the driver lifts their foot off the brake.

Fuel economy is further improved by changing the direct injection and continuously variable valve timing systems. The new-generation V6 LGX features VVT with an ‘intermediate park’ feature, which will automatically set the cam in the optimal position for a cold start, thereby improving fuel economy. The piston tops have also been carefully shaped to promote a better mix of the air and fuel during the direct injection process, ensuring a more “complete” combustion. As a bonus, the LGX runs on regular fuel and does not require premium.

Similar to the twin-turbo 3.0-liter LGW, refinement was at the forefront of GM’s focus for the new 3.6 LGX. The oil pump has been moved underneath the cylinder block and is located inside the oil pan for greater silence, while the engine cover actually serves an acoustic barrier to further reduce noise. The oil pan itself is also made of stamped steel for “optimal noise-absorption characteristics,” according to Cadillac.

The new 3.6-liter V6 LGX engine will be built alongside the new 3.0-liter twin-turbo at GM’s Romulus Powertrain assembly plant just outside of Detroit. The LGX will first debut in the CT6 and will later also become available in the smaller CTS and ATS, as their powertrains receive a refresh.