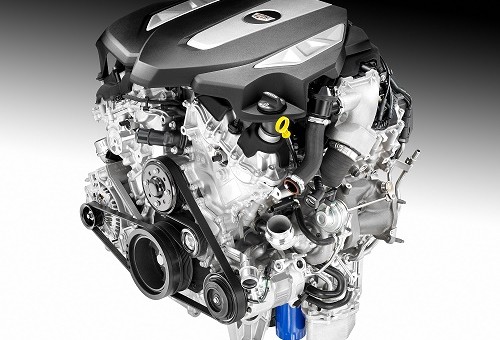 Cadillac today announced a new family of six-cylinder engines, which will be featured in the upcoming 2016 Cadillac CT6 full-size sport-luxury sedan. The highlight of the new engine lineup is this 3.0-liter twin-turbocharged V6 engine which “leverages the latest technology to balance efficiency, performance and refinement,” in the range-topping luxury sedan, Cadillac says.

Carrying production code LGW, the 3.0-liter twin turbo engine will be mated to the 8L90E eight-speed automatic in the CT6. The combination makes 400 horsepower and 400 pound-feet of torque, qualifying it as one of the most power-dense V6 engines in the world. It’s also one of the most powerful six-cylinder engines in its segment, topping BMW’s 315-horsepower 3.0L twin-turbo inline-six and Audi’s 3.0L supercharged V6. According to Cadillac, the 3.0L LGW V6 will be exclusive to its vehicles and not shared with others from among GM.

Last year, General Motors product chief Mark Reuss said that the CT6 would be “the most advanced vehicle technologically in the world,” and with the debut of the full-sizer’s new 3.0-liter twin-turbo LGW engine, we’re beginning to see what he meant. The power unit is the only one in the world to combine turbocharging, stop/start technology and cylinder deactivation to preserve fuel, a combination which by itself improved fuel economy by six percent. The engine also boasts several new features designed to improve refinement and reduce noise levels including:

These features will also be present in the entire range of new Cadillac V6 engines, however the 3.0-liter engine has several specific components that help with the additional 18 psi of cylinder pressure provided by the turbochargers. To start, the 86mm bore stroke is 10 percent smaller than that in new naturally-aspirated 3.6-liter LGX, which allows for smaller and lighter pistons. There’s also larger 36mm intake valves and 29mm exhaust valves, and a lower 9.8:1 compression ratio.

The turbochargers use lightweight, low-inertia titanium-aluminide turbine wheels, similar to the ones used in the ATS-V’s twin-turbo LF4 V6. Combined with a patented low-volume charge-air cooler, the turbos help sustain peak torque from 2,500 rpm all the way to 5,000 rpm. Cadillac says the engine produces “nearly zero turbo lag” thanks to the small size of the turbos and their featherweight titanium turbines. Additionally, a single, centrally-mounted throttle body has been used instead of two separate units, which also contributes to improved engine response and torque delivery.

The new 3.0-liter V6 engine will be built alongside Cadillac’s new 3.6-liter engine at GM’s Romulus Powertrain assembly facility in Michigan. GM invested $540-million into the plant in 2013 in order to accommodate production of the new engine family.