It may not seem like much on the surface, but plenty of planning went into the design and engineering of the new gravity-defying Vauxhall sculpture in London. The sculpture features the new Vauxhall Corsa hanging 15 feet in the air on 50 feet of arched pavement, and the aesthetics are extremely well done, with no visible structural support.

The behind-the-scenes video provides a timeline of the work that went into completing the project, while proving that hanging a car 15 feet in the air is no easy task, as you might imagine. Having crafted other installations in a similar fashion, well-known British artist Alex Chinneck was responsible for the project. To represent the new B-segment/subcompact model accurately, Chinneck spent a healthy amount of time studying the new Corsa.

What allows the Corsa to hang in the air with so elegantly is the hidden steel structural framework. The structural elements appears to be tarmac, but it’s actually a clever representation of the material using fancy art products to mimic the material. The mold is then formed and shaped to represent a tidal wave of asphalt, with the car hanging from it. Pretty darn cool, if you ask us.

Check out the accompanying video for an architectural explanation as well as to see what went into the build.

The exhibit, entitled Alex Chinneck for Vauxhall Motors: Pick yourself up and pull yourself together is currently running from Thursday, February 19th until Wednesday, February 25th at the Southbank Centre Car Park, located at: 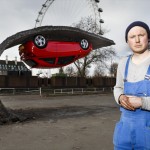 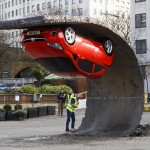 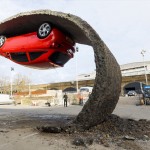