Just a day after we shared our heard-through-the-grapevine details regarding the revamped Buick Excelle GT, Shanghai GM has put out a press release confirming our report.

The new Buick Excelle GT will offer the customer’s choice of either a 1.4-liter turbo, or a normally-aspirated 1.5-liter. Both possess 4 cylinders, and feature direct-injection. It’s officially official.

Shanghai GM boasts that the new Buick Excelle GT carries on the brand’s “dynamic and sleek” design language, borrowing from the Buick Riviera II concept car. Looking at the car’s exterior, that seems like a bit of a stretch.

Inside, the Excelle GT has an upscale-looking wrap-around cockpit which, while clearly derived from the current car’s interior, achieves a much greater level of beauty. While the materials certainly look to be mostly synthetic, it’s a convincing mimicry, and they wrap around a more elegant, curvy and narrow dash.

Also appearing on the new Buick Excelle GT is an independent rear-suspension, like the one we’ll see on the new Opel Astra due out later this year. Shanghai GM boasts that in-conjunction with the body’s 65 percent-composition of high-strength steel, the car is guaranteed to handle with quite a lot of agility.

The all-new Buick Excelle GT is expected to publicly debut in April, at the 2015 Auto Shanghai. 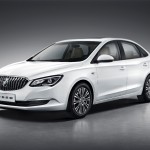 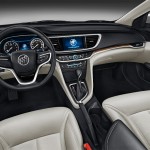