You may recall that awhile back, photographer Karl Lagerfeld made waves with a 2015 Opel Corsa calendar shoot starring his Birman cat, Choupette. It was a big deal, because while the typical promotional calendar shoot might cast a young human starlet in her prime, Mr. Lagerfeld managed to both upset an age-old trope, and convey a sense of friendliness and approachability about the new Opel Corsa E in the process.

Well last Tuesday, the 3rd, Mr. Karl Lagerfeld and his cat hosted a special preview of his exhibition, entitled: “Corsa Karl And Choupette.” The event, hosted at the Palazzo Italia in Berlin, drew a number of celebrity guests, all of them apparently German.

(No, Christoph Waltz was not there.)

The exhibition was very well-received by those in attendance. Said Opel CEO Dr. Karl-Thomas Neumann: “I am delighted that we managed to prominently position the new Opel Corsa with the calendar and this exhibition and that Karl Lagerfeld, whose model Choupette is the focal-point of the vernissage [or preview], is here personally today to open the exhibition.”

Below, you can enjoy a handful of the playful, melt-your-heart photos of Choupette and the new Opel Corsa E. 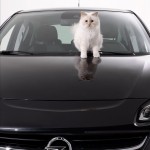 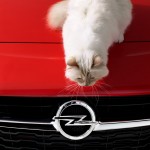 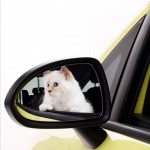 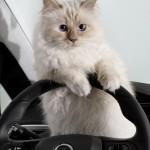