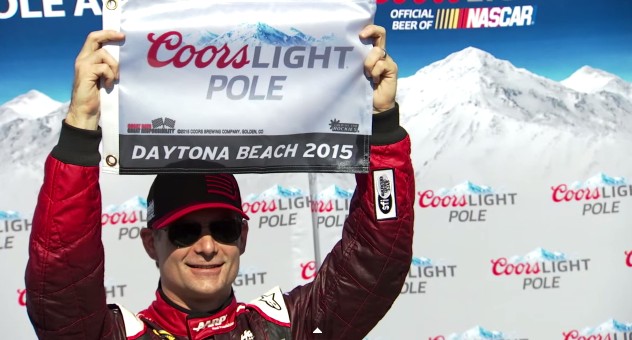 Jeff Gordon came out on top following a Daytona 500 qualifying session that Tony Stewart described as “a complete embarrassment,” for NASCAR. The 43-year old, who will race in his final Sprint Cup season this year, put his Chevrolet SS on pole position for ‘The Great American Race’, setting himself up for success in what will be his last-ever Daytona 500.

NASCAR last year traded in its single-car qualifying format in favor of knockout group sessions. The format is intended to be more entertaining for spectators, but has led to problems at the larger superspeedways like Daytona and Talladega. On the larger tracks speed is everything, and the car in front won’t be the fastest as it cannot draft. This has led to drivers waiting on pit-road until the last minute, as they don’t want to be the first driver out.

“This format is crazy and chaotic,” Gordon told ESPN. “It can be extremely rewarding when you have a day like we had.”

A five-car accident in the first qualifying session forced many drivers to publicly vent their frustrations in regards to the format. Clint Bowyer sarcastically described the format as a “cute show”, while Ryan Newman said every driver he talks to “doesn’t understand why we’re doing this.”

The 12 drivers which made it into the final qualifying round, including Gordon, weren’t complaining about the format, however. Gordon expressed excitement about starting his “final Daytona 500, final full season, on the pole,” saying the starting position is “pretty important” to him.

It won’t be all smooth sailing for Gordon though. A Daytona 500 pole winner hasn’t won the race since Dale Jarrett in 2000 and since then, only one of the 14 pole winners has even managed to finish in the Top 5. Despite this, Gordon will be searching for victory when the green flag waves on February 22.