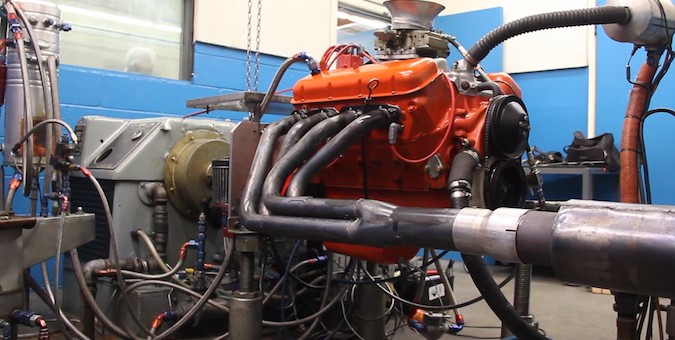 In 1962, Mickey Thompson received two Smokey Yunick-built Chevrolet 427 motors to put under the hood of his race-prepped C2 Corvette Z06s. These motors were referred to as the Mark IIs 427 V8s and used Chevrolet 409 Big Block bore spacing, and bore/stroke specs, making Thompson’s two cars the first Corvettes to ever run under Big Block power.

The Corvettes were later converted back to normal Chevrolet Small Block configurations, with one eventually ending up in the possession of Tom McIntyre. McIntyre also purchased one of Yunick’s prototype Big Block 427 Mark IIs motors at a mid-1980s auction with the intention of dropping the Mystery Motor back into Thompson’s 1963 Z06.

McIntyre is now ready to rekindle the relationship between the legendary prototype Mystery Motor and Thompson’s Z06. He invited Hot Rod magazine out to Shaver Specialties in Torrance, California to see the engine run for the first time in over 30 years on a dyno. After some minor maintenance, the engine screamed all the way up to a 6,000 RPM redline, producing an incredible 440 horsepower and 435 lb-ft of torque.

Tom was probably delighted to see his old Chevy motor produce power numbers like that, but most of all, he was relieved it completed the test without lunching itself. He can now drop the motor in Thompson’s Z06, completing one of the most legendary vintage Corvette builds in recent memory.

Check out the dyno pull in the video below, and for more info on this historic engine, check out Hot Rod’s detailed write-up.