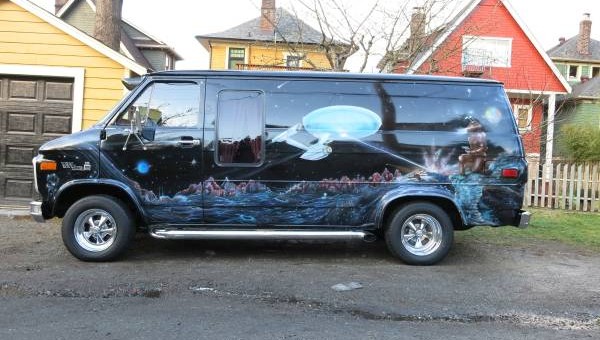 The seller of this unique 1978 GMC Vandura van says you “cannot go anywhere,” without receiving thumbs up, cheers, and people wanting to talk to you about Star Trek. To us, that sounds like a sci-fi nerd’s ultimate fantasy, so if you’re a Trekky of the highest order, maybe you should take a look at the listing on Craigslist.

This van would be pretty cool even if it didn’t have a slightly NSFW Star Tek mural painted on it, as 70s-era GMC  Vandura vans aren’t usually seen in this condition. It’s a true survivor, having lived in the same garage for over 33 years , and is in impressive shape both inside and out considering its age. The seller says it has 25,000 kilometers on it (about 15,500 miles) but being the hoenst Canadian he is, says he can’t verify the previous owner didn’t turn back the odometer from 125,000 km. No matter the mileage, he says the General Motors V8 is fully operational and he “wouldn’t hesitate to drive it anywhere.” He even takes it up into British Columbia’s mountains.

The Star Trek mural was done by George S. Roy, a well-known, Toronto-based artist. The various pictures on the outside are joined by even more surprises on the inside, including velvet covered everything, a bed with a quilted headliner and privacy curtains, and a sink. We’re sure someone had lots of fun back there in the 70’s, and now you can too. Check out the listing on Craigslist in Vancouver here.