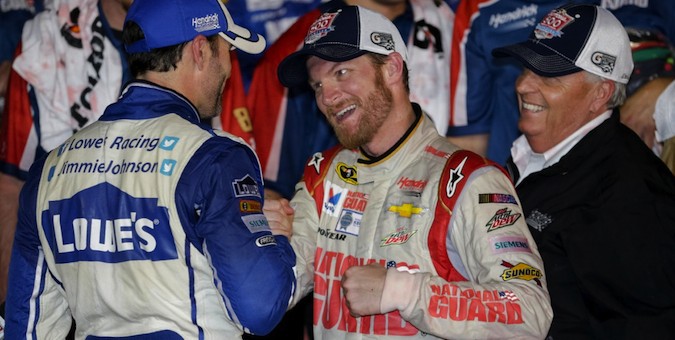 Hendrick Motorsports is a powerhouse of NASCAR talent. The Rick Hendrick-led team consists of Jeff Gordon, Kasey Kahne, Jimmie Johnson and Dale Earnhardt Jr, the latter two of which are NASCAR’s highest-paid drivers, according to Forbes.

For the seventh straight year, Earnhardt Jr. was NASCAR’s highest earner in 2014, pulling in a total of $23.8 million. A large contributor to this was his merchandise sales, which topped all other drivers on the Sprint Cup grid. Earnhardt Jr.’s diehard fan base is a large contributor to his earnings, helping him lock-in big name sponsors like Chevrolet, eBay, Goody’s and Wrangler. Jr.’s car is also the priciest for companies to advertise on, netting him and Hendrick even more cash.

Johnson narrowly trails Earnhardt Jr. as NASCAR’s most well-paid athlete, raking in an estimated $22.5 million last year. Winning the Sprint Cup Championship in 2013 helped Johnson secure a few more endorsements from the likes of The Gap and Mission, which joined the already lucrative deals he had with Chevrolet, Lowes and Gatorade. This year, Johnson’s contract with Hendrick Motorsports will expire, however he’s looking to extend the partnership through to 2017.

Forbes says its driver earnings estimates were calculated by taking into account their salaries, endorsements, the drivers’ share of winnings/bonuses and licensing income. NASCAR’s top 12 drivers banked a combined $187 million in 2014, down from $192 million the year prior.