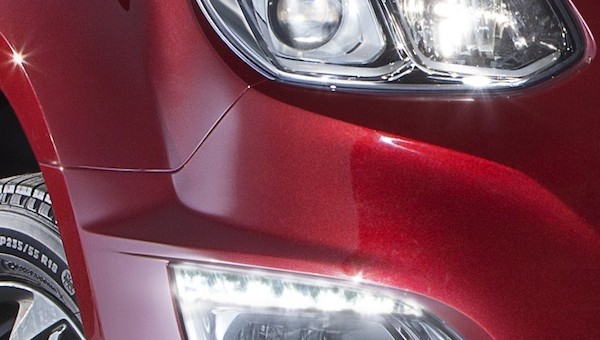 Late last month, Chevrolet revealed an updated version of its Equinox crossover will make its debut at the upcoming 2015 Chicago Auto Show. We have yet to hear what those updates may entail, but a new teaser image from Chevrolet has helped clear the air a little bit.

From the teaser it’s apparent the 2016 Equinox will receive an all-new front fascia. The image shows redesigned headlights, along with new foglights and LED daytime running lights. There’s also a contoured bodyline running just below the new headlights, a styling element not seen on previous Equinoxs.

The filename for the teaser photo also indicated it was a range-topping LTZ model. The LED lights, along with those stylish new wheels, may only be available on LT or LTZ models, but it’s impossible to say this early on.

Few Chevrolet models have sold in such consistently strong numbers as the Equinox. January was no different, with the bowtie moving nearly 20,000 units throughout the month, a 34-percent increase year-over-year. The model also boasts five consecutive years of record sales and accounts for 9 percent of the compact SUV market.

More information on the 2016 Equinox, along with additional photos, should become available following the model’s reveal late next week.