The rise, fall and resurgence of the Chevrolet Camaro’s engine output represents the American automotive industry’s change in its thirst for performance. A new infographic released by Chevrolet shows the Camaro’s power has ranged from a low of 88 horsepower to a peak of 580 in the new ZL1, a result of the oil embargo-influenced 1970s.

The Camaro hit the American market in 1967 with Chevrolet’s inline-six cylinder engine on offer, delivering up to 140 horsepower and 220 lb-ft of torque. Higher-performing models were also available with a range of V8 engines, including a 200 horsepower 307 Small Block and 375 horsepower 396 Big Block. Don’t forget the 427 cubic-inch COPOs, either.

Things changed a bit in the ’70s, however. Regulatory changes, including the switch to unleaded fuel for lower emissions, forced engineers to reduce engine compression, horsepower and torque for the Camaro. The model’s output peaked in 1970 with 375 hp and 415 lb-ft, but by 1975 the most powerful V8 Camaro had only 155 hp.

By the time 1982 rolled around, there was a new Camaro. The model was offered with a four-cylinder engine for the first time, which produce a paltry 88 to 92 horsepower, depending on whether it was a carbureted or fuel injected. Early third-gen V8 models used Throttle Body Injection and later 305 and 350 engines featured Tuned Port Injection. Power for this generation Camaro peaked in 1990 with the 350 TPI Small Block rated at 245 hp and 345 lb-ft of torque.

By the time the fourth-generation model rolled around, Chevrolet was a little more serious about performance. A 3.4-liter V6 with 160 horsepwoer was on offer, along with a 200 horsepower 3.8-liter V6. The 1998 Camaro SS, with the now tried-and-true LS1 V8, made 305 hp and 335 lb-ft of torque, the most a Camaro had made in a long while.

Today, the Camaro is one of the highest performing American-made cars of all time, with a 580 horsepower 6.2-liter supercharged ZL1 variant, a race-track ready 500 horsepower Z/28 and a base-model V6 with more power than many of the V8s of the model’s past.

Americans’ thirst for performance may have tapered off for a bit, as represented by the 88 horsepower Camaro of the 80s, but it’s now back in full-force, and it’s seemingly here to stay. 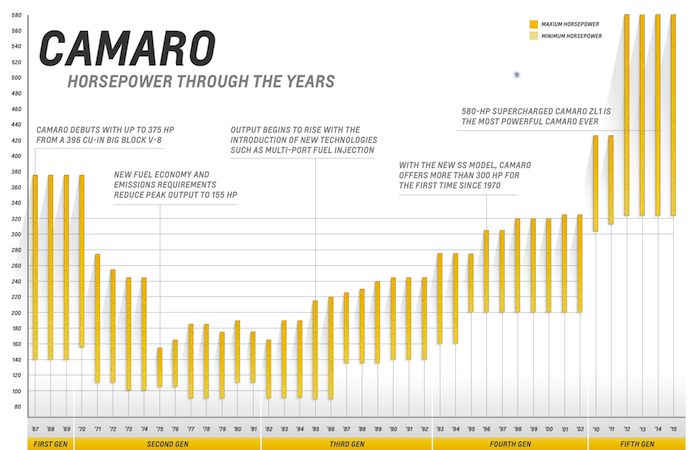