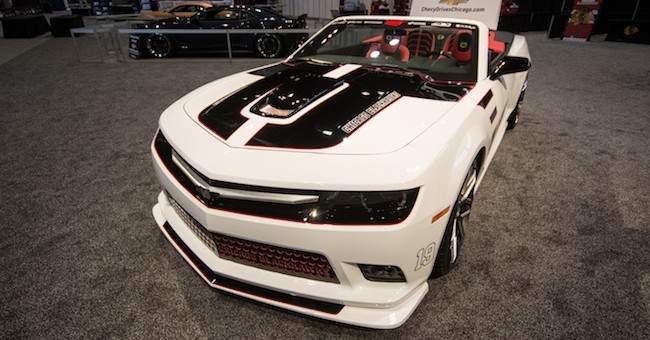 For the past three years, Chicagoland and Northwest Indiana Chevrolet dealers have had a Chicago Blackhawks-themed fifth-generation Camaro done up by Gurnee, Illionois-based aftermarket shop Real Wheels. The car is always shown at the Chicago Auto Show before being given away to a lucky winner in a raffle at the beginning of the summer.

This year’s Blackhawks Camaro is arguably the most attractive of them all. The car has numerous bespoke pieces, like a grille with cutouts in the shape of the Blackhawk’s chief logo, black Chevy bowties with Blackhawks ‘C’ logos engraved into them and red-painted Blackhawks brake calipers.

You’d have to be a diehard Chicago Blackhawks fan to happily drive this thing around in public. That said, the build is exceptionally well done and if the Blackhawks ever win the Stanley Cup again, you’ll be the coolest guy at the celebratory parade.

If you’re a resident of Chicago and its surrounding area, you can enter to win the Camaro here. Applications to win the car will stop being accepted on June 30, 2015, with the winner being announced on July 10.