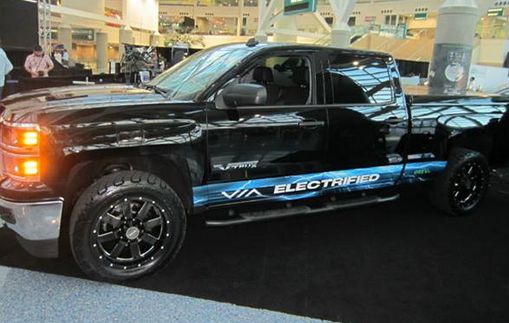 VIA Motors is setting its sights on a sales target of 50,000 plug-in pickups and delivery vans by 2018, says non-executive chairman Bob Lutz. The VIA vehicles utilize a gasoline-powered generator to extend driving range by producing electricity for the battery pack and drivetrain.

The electric hybrids provide immense fuel savings for and the company provides charging stations in remote areas for campers, catering companies, utilities and the military, said Lutz, who helped develop the Volt as vice chairman of General Motors. Fittingly, Lutz also once stated that the Volt should have been a truck.

“We’re not trying to be Tesla,” Lutz said, referring to billionaire Elon Musk’s maker of high-end electric cars that aims to grow from 50,000 sales next year to 500,000 by 2020. “But these vehicles get over 100 miles per gallon and have lots of other advantages. They basically act like mobile generators.”

VIA purchases Chevrolet Silverados from General Motors and then installs its two electric motors and a lithium-ion battery pack that, when fully charged, is able to power the car for 40 miles. The trucks are able to travel up to 400 miles with a full charge and a full tank of gas.

The forty miles of pure electric range is more than enough for most buyers employing the VIA pickups. With gas at $1.80 as an example, companies can cut expenses by around $300 a month according to Lutz. The savings off-set the lease payment, and the advantage can only grow if and when gas prices rise again.

The VIA Motors VTRUX pickups also offer the option of installing a solar panel in the bed to recharge batteries for added efficiency. If the option isn’t ticked, the VIA is also outfitted with plenty of 120 and 240-volt outlets for charging the batteries as well.

VIA will start selling the plug-in Silverado pickups to fleet customers in February and to individuals by the end of the year, Lutz said. FedEx Corp., PG&E Corp., Duke Energy Corp. and Verizon Communications Inc. have already placed orders, Lutz said at the North American International Auto Show in Detroit.