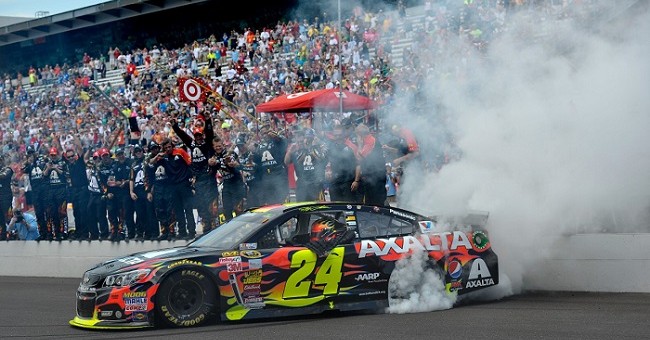 The widely celebrated stock car driver won’t return to the No. 24 car in 2016, which he has driven every year since November of 1992. Hendrick Motorsports has yet to name a replacement for the four-time Sprint Cup champ, who has earned the team 92 points-paying race wins and 77 pole positions throughout his career.

“As a race car driver, much of what I’ve done throughout my life has been based on following my instincts and trying to make good decisions,” Gordon said in a prepared statement. “I thought long and hard about my future this past year and during the offseason, and I’ve decided 2015 will be the last time I compete for a championship. I won’t use the ‘R-word’ because I plan to stay extremely busy in the years ahead, and there’s always the possibility I’ll compete in selected events, although I currently have no plans to do that.”

The 43-year old’s countless fans will be happy to hear he “don’t foresee a day when (he’ll) ever step away from racing,” and “will remain heavily involved with Hendrick Motorsports,” and the NASCAR organization for many years to come.  Team owner Rick Hendrick will be more than happy to have Gordon around in the future, saying there’s “simply no way to quantify Jeff’s impact.”

“He’s one of the biggest sports stars of a generation, and his contributions to the success and growth of NASCAR are unsurpassed,” said Hendrick. “There’s been no better ambassador for stock car racing and no greater representation of what a champion should be. I will never be able to properly express the respect and admiration I have for Jeff and how meaningful our relationship is to me. I’m so grateful for everything he’s done for our company and my family, and I look forward to many more years together as friends and business partners.”

Hendrick described Gordon as one of the “most versatile drivers of his era in any auto racing discipline,” with his extensive and impressive resume consisting of three Daytona 500 victories, a record five Brickyard 400 wins and another record nine road course wins and 12 restrictor plate wins. He has also won at every track on the Sprint Cup circuit except for Kentucky Speedway, which is surely on his victory radar this year.

“I’ll explore opportunities for the next phase of my career, but my primary focus now and throughout 2015 will be my performance in the No. 24 Chevrolet,” Gordon said. “I’m going to pour everything I have into this season and look forward to the challenge of competing for one last championship.”

“To everyone at NASCAR, my teammates, sponsors, competitors, friends, family, members of the media and especially our incredible fans, all I can say is thank you.”