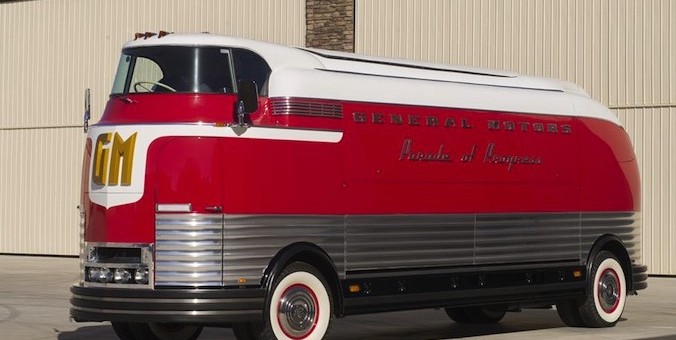 Last week, we told you one of the nine General Motors Futurliners still in existence was set to cross the Barrett-Jackson auction block in Scottsdale, Arizona over the weekend. The same Futurliner was last sold at Barrett-Jackson for $4.1 million, and commanded nearly the exact same asking price on its second trip to the legendary classic car auction.

The 1950 Futurliner was previously owned by noted collector Ron Pratte, who purchased the bus during a historic bidding war at Barrett-Jackson’s Scottsdale auction in 2006. The buses original owner wanted $600,000 for the Art-Deco automobile, but the bidding eventually hit an astronomical and very unexpected $4.1 million.

Pratte restored the bus all over again once it was in his possession, and decided to throw it back on the auction block this year. On Saturday night, a phone bidder beat out noted GM car collector and NASCAR team owner Rick Hendrick for the former Parade of Progress rolling exhibit, ponying up $4 million for the iconic Futurliner.

Pratte, a Vietnam veteran who served with the US Army’s 1st Air Cavalry Division in 1968, was likely ecstatic to see the Futurliner sell for such a significant sum. All the proceeds from the sale went to the Armed Forces Foundation, a non-profit organization that aims to “protect and promote the physical, mental, and emotional wellness of military service members, veterans, and their families.”