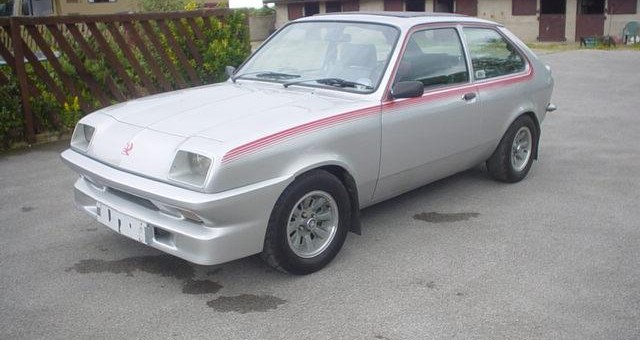 When Vauxhall’s Ellesmere Port Plant produced its 5 millionth car, the automaker celebrated by drifting, sliding, and hooning different Vauxhall compact cars around the plant. Among them was Vauxhall’s special Group 4 rally homologation special, the Chevette 2300 HS, a little-known model which is a rare sight in the UK.

Pistonheads recently stumbled upon a mint Chevette 2300 HS for sale in the UK. The 2300 HS was developed as an answer to the Ford Escort, which had been experiencing great success in FIA Group 4 rallying. The road car car was given a more powerful 2.3-liter four-cylinder, 16-valve engine, along with the axle and other suspension components from a Kadett GT/E and a five-speed manual transmission. A minimum of 400 cars had to be made to meet FIA rules, and all cars were painted silver with a red tartan interior.

The Chevette 2300 HS was a rallying success, driven by Pentti Airikkala, Jimmy McRae and Tony Pond, it won the British Open Rally Championship drivers title in 1979, and the manufacturers title in 1981. This spotless example of the rare rally special has just 68,000 miles on the odometer and is commanding a £15,000 asking price (a bit over $22,000).

It appears the Chevette HS 2300 has received a little less love than other equivalent cars of the era, like the MKII Ford Escort RS2000. As Pistonheads points out, similiar Escorts are fetching closer to £20,000, but the Chevette is the less obvious choice, and it still has that cool retro rally look to it. The Chevette is also extremely rare, with only 25 licensed on UK roads, according to HowManyleft.co.uk, making it more exclsuive than most supercars.

If you;re interested, check out the listing here for additional information and photos.