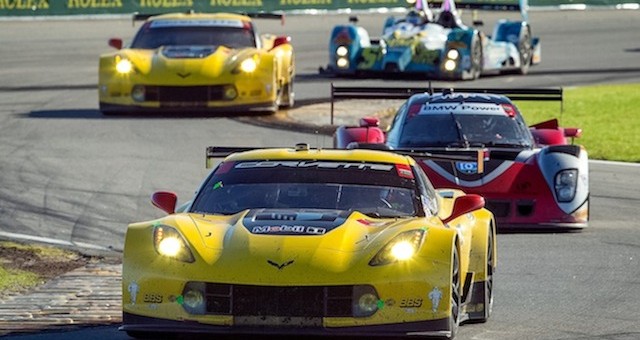 The yellow Corvette returned to victory lane at the Rolex 24 at Daytona after Antonio Garcia, Jan Magnussen and Ryan Briscoe drove their No. 3 C7.R to a GTLM class victory Sunday. The race marked the Corvette Racing’s second return to Daytona following its historic class victory in 2001 in the C5-R.

In addition to taking home a class victory, Corvette Racing’s No. 4 car, driven by Oliver Gavin, Tommy Milner and Simon Pagenaud, finished third in the race behind the BMW Team RLL No. 25 BMW Z4 GTE. The No. 4 car, which started from pole position following a blistering qualifying session from Gavin, was in good position to win the race, but lost four laps after making contact with the No. 66 RG Racing BMW Dinan/Riley Prototype with only three hours remaining.

“The BMW was racing us hard,” explained Gavin. “I was trying to catch up to the 3 car and I went a bit too deep into Turn 6. I got into the back of a PC car and that meant an extended stop to fix it. It was a shame but fortunately through some strategy and clever pit work, we got back on the lead lap. I got to within about 10 seconds of Jan but he’s really tricky. I’ve done that for many years. It’s looking like it’s going to come down to one of our cars and maybe the BMW. Everyone is pushing hard but they don’t want to screw it up because if you really make a mess of it now, you’re really out of the game.”

The No. 3 car’s 24 hour session was less troublesome. Over the course of their 725 laps, which covered 2,581 miles, the No. 3 C7.R experienced virtually no problems, with Garcia saying their problem-free race is what helped them put the car at the top of the podium.

“We stayed out of trouble. The car is in perfect shape. Not a single touch,” said Garcia. “I think that’s what it takes just to keep it alive and bring it home in one piece, that’s the thing. So, again, finally I get this watch and I think these guys were waiting a few years for that (laughs).”

The No. 3 C7.R led more than 360 GTLM laps in the hands of Garcia, Magnussen and Briscoe, and recaptured its lead with just 90-minutes left when the then-class leader experienced car trouble. A perfect pit stop for fuel and tires shot them further into the lead, and the C7.R crossed the finish line just 0.478 seconds ahead of the next fastest car.

The win is Corvette Racing’s first podium since it finished 1-3 at the Long Beach race last April. The team now sits at the top of the Tequila Patrón Endurance Challenge rankings, an endurance series within the Tudor USCC’s season consisting of four 6-, 12- and 24-hour events. The series will continue on March 21 when the green flag drops on the Mobil 1 Twelve Hours of Sebring, where Corvette Racing will be in search of its second consecutive podium in 2015.