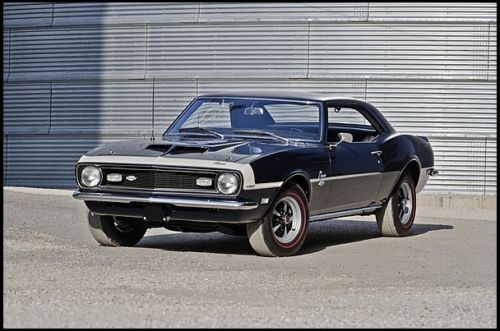 It’s said that Don Yenko only made 65 examples of his famous L72-powered, 450 horsepower “Super Camaro”, making the rare beast royalty among muscle car enthusiasts. As a result, a Yenko Camaro will usually command the type of price tag that only royalty can afford, and this mint 1968 model year Yenko currently for sale on eBay is no exception.

This particular Yenko is model number YS 8011 and was sold new by Jay Kline Chevrolet in Minneapolis, Minnesota. According to the seller, the car was found in the Californian desert with its original paint, Yenko stripe and emblems still intact. The car was verified as a real Yenko by its Special Order Magic Mirror Yenko trim tag and Yenko door jamb tag, which contained a Yenko serial number. The car shows up on the Yenko VIN list, as does several documents proving its history and lineage.

After being rescued from the desert, the Super Camaro was sent to Illinois where a full restoration was performed by Rick Nelson at MuscleCar Restoration and Design. The seller says the restoration was a “no expense spared” job, costing an unsurprising six-figures to be completed. Only original GM parts, new old stock or restored parts were used during its overhaul process, ensuring the car appears just as it did in Yenko’s shop in 1968.

Are those 5,000 $100 bills in your wallet getting a bit uncomfortable while its your back pocket? Why not blow them on a priceless piece of Chevy history which is sure to go up in value as the years go on? Check out the listing here for additional photos and information.