The unveiling of the Buick Avenir concept at a private reception the night before the commencement of the 2015 North American International Auto Show was quite a pleasant surprise. Truth be told, we’re still salivating over the concept, which explores a progression of Buick design in the form of a flagship sedan. Avenir’s styling is alluring and unique, and we’re here to shed some light on how its various details and intricacies, and to tell you the story of how it came to be.

French for future, Avenir concept is set apart by premium proportions of a sport sedan and all-new interpretations of traditional Buick cues. It was penned by a global team of designers and sculptors in America and in Australia who drew inspiration from historic Buick concepts that, back in their day, shaped the design of future Buick models, pushed traditional design boundaries, and influenced the entire auto industry.

“Avenir embodies Buick design, which centers on effortless beauty and presence without pretense,” says Ed Welburn, vice president of General Motors Global Design. “It demonstrates the growing international reach of Buick and offers an exciting vision of where it can go.”

With a nod to the past, Avenir’s sculpted surfaces, taught lines, and short overhangs have several distinctive styling elements that are all-new to the Buick family, while others iterate existing details.

Make no mistake about it: the concept is as full-size as they come. The broad-shouldered sedan spans 204.5 inches (5,195 mm) in length and 76 inches (1,931 mm) in width, placing it squarely in the full-size category. For the sake of comparison, the BMW 750Li and Lexus LS460L — the long-wheelbase versions of each respective flagship sedan — span 205.2 inches and 205 inches in length, respectively. 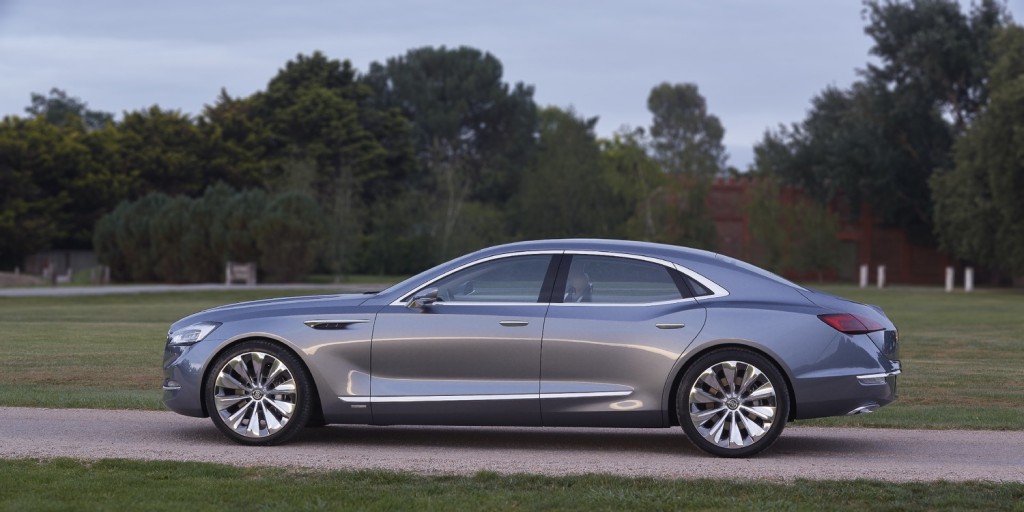 At 204.5 inches long and 76 inches wide, Avenir concept is on the fuller side of full-size

“It’s a sculpted design with a lot of snap in the character lines – with a classic long, low proportion,” said Michael Simcoe, vice president of design, GM International Operations. “Its length enables exceptional spaciousness inside, but just as importantly, a presence that speaks to luxury and the importance of style. In short, it’s the befitting proportion for a Buick flagship.”

A very upright nose oozes a refined and composed presence without being overly aggressive. That, by far and large, is the purpose of the non-ostentatious luxury image and experience that Buick has been carving out for itself over the last several years. It’s approachable luxury that’s sophisticated and worldly, without the showmanship of other, more “red-blooded” luxury marques. 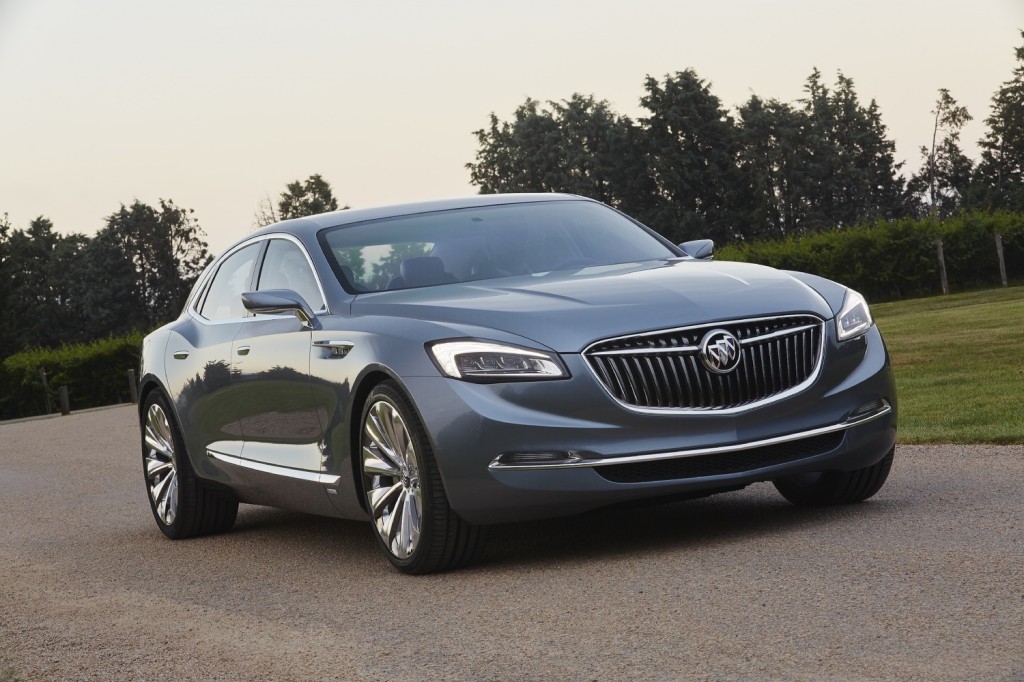 The full-LED headlamps have three clusters each, and the “wing” accent light — a design hallmark of the Buick-Opel-Vauxhall trifecta — sits nicely atop each headlamp. A small, but noticeable, Buick logo adorns the bottom portion of the wing. 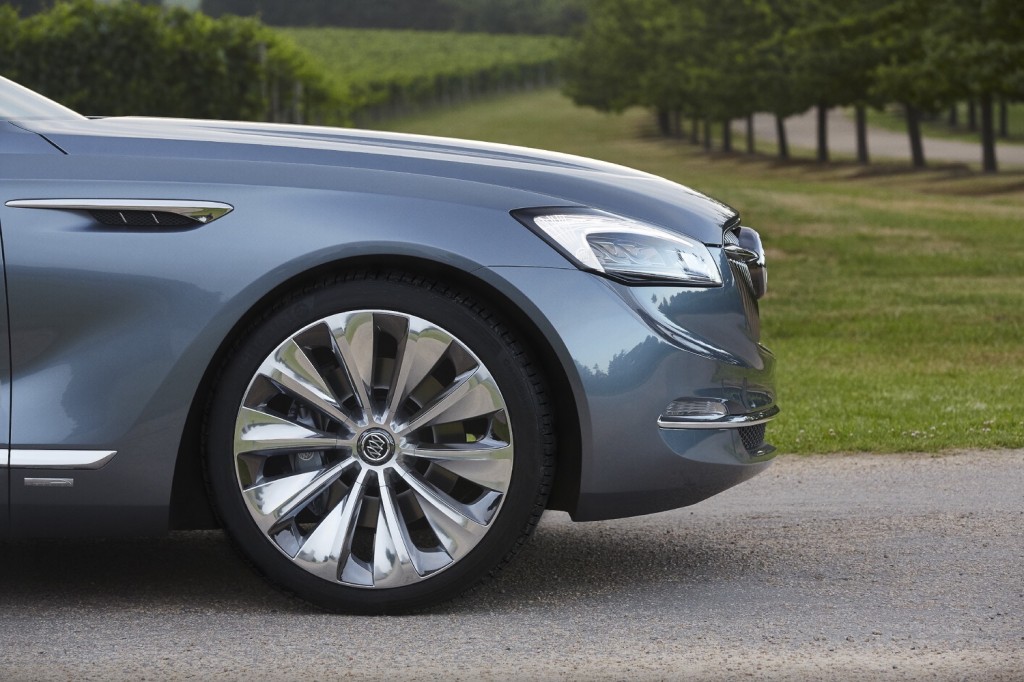 An upright nose is a first for modern Buicks

The most prominent departure from contemporary Buick models, however, is the new grille. An iteration of Buick’s legendary waterfall pattern, the new grille features two wing-shaped elements to each side of the Buick badge, which reinstates the red, silver, and blue colors. 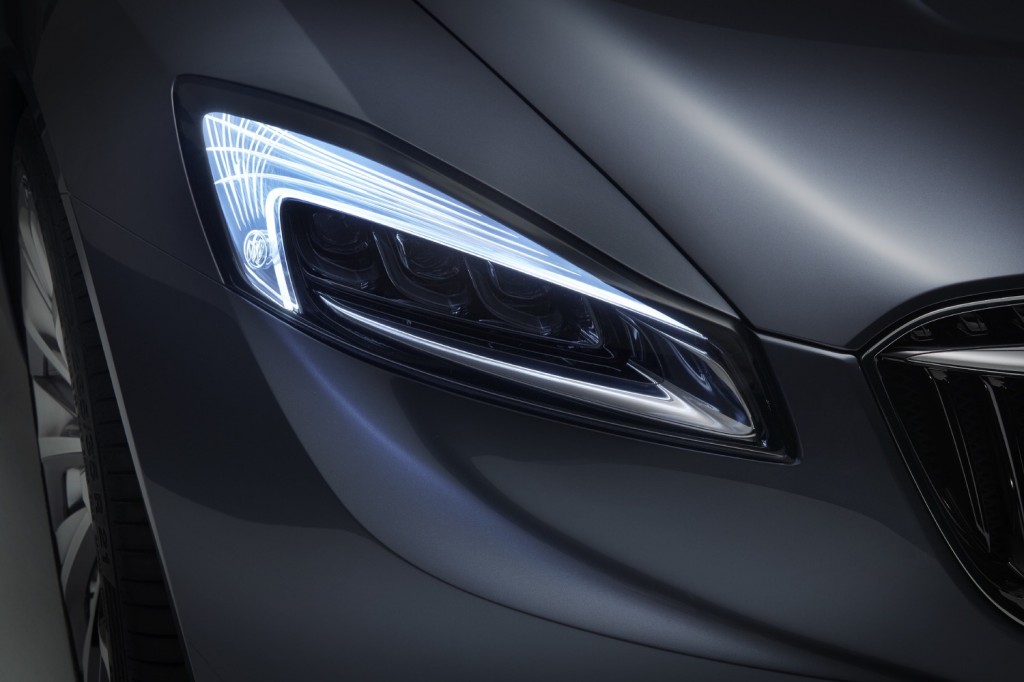 Look closely, and you’ll notice intricate surface styling on the hood as well as on the front bumper cover. Complementary to the wings in the headlights, the bumper surface shaping starts at the bottom of the light and curve inward, ending right below the bottom corners of the grille. A pair of fog lights are accentuated by a chrome strip that runs the width of the lower fascia. The theme started by the chrome strip spans each surface of the vehicle.

Take one good look at the its silhouette, and you’ll see a long hood leading to cab-rearward proportions, a very healthy axle-to-dash ratio, and short overhangs that lend to a confident wheel-at-the-corners stance. The design elements scream “rear-wheel drive”.

True to its form, these attributes are a direct result of a rear-wheel drive platform, as they are otherwise unattainable with any other kind of setup. Although unconfirmed, we have it on good notice that the platform underpinning Avenir is GM’s new Omega vehicle architecture that will debut with the upcoming Cadillac CT6 full-size sedan.

Just a few centimeters below and ahead of the door-mounted and intricately-surfaced wing mirrors are three portholes accentuated by a chrome accent. The chrome theme that was originally introduced at the nose by the strip accentuating the fog lights is also seen surrounding the green house as well as marking the lower aspect of the doors. 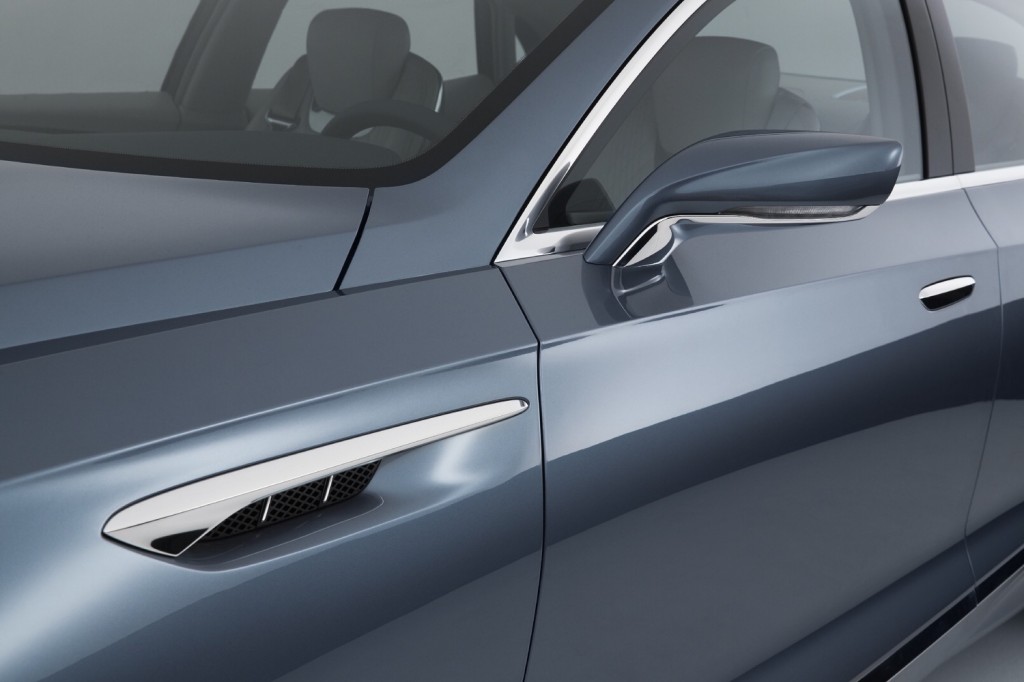 The doors have an abundance of surface styling that works harmoniously to introduce a redesigned version of Buick’s signature sweep-spear, which runs through the C-pillar and merges with the sloping rear deck. Fans of Avenir’s rather wide and pronounced hips have the reimagined sweep-spear to thank, as it starts at the hood and runs the duration of the side, thereby creating a sort of “ledge” along the profile before masterfully rising at the C-pillar and then tapering into the decklid. We’d say that this, by far, is the single most memorable and distinguishing design element of the vehicle.

We’re at a loss for words over that sweep-spear

There’s also a small vanity window just aft of the rear door. Its presence is a design trick of sorts, providing Avenir with the mirage of a longer passenger compartment even though the greenhouse technically ends at the end of the rear door. Another unique element is the roofline. Designers held out on sloping it downward until after the end of the C-pillar, bucking an industry-wide trend of sloping the roof right after the B-pillar for a more “coupe-like” appearance. By contrast, not only does the concept’s relatively flat roof allow for more headroom in the second row, but it also creates a less stubby contour. 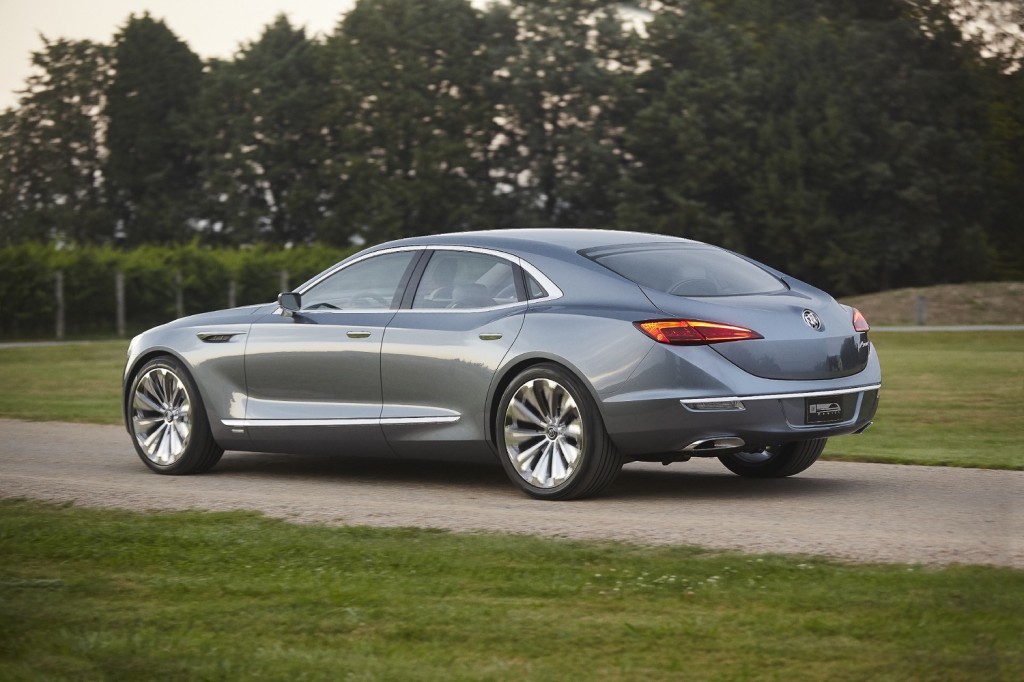 The vanity window aft of the rear doors tricks the eye into believing that the greenhouse is longer that it actually is, the flat roof is practical yet sexy, and there’s something special about the C-pillar sitting atop the 21-inch wheels

Avenir’s door handles are inset and seem to be the only element of the concept’s exterior that wouldn’t make it to full-scale production. The car sits on twenty-one-inch chrome wheels, with the rear wheels sitting immediately below the C-pillar. Though we can’t quite delineate it, there’s something special in the interaction between the C-pillar and the rear wheels.

The work of art that is the Avenir concept’s body continues into its stern with a sloping rear deck that pays homage to historical Buicks such as the Riviera, while distinguishing the concept’s proportions. Meanwhile, the reimagined sweep-spear makes possible the wide C-pillars and broad hips, which culminate in an intricately-styled trunk lid. 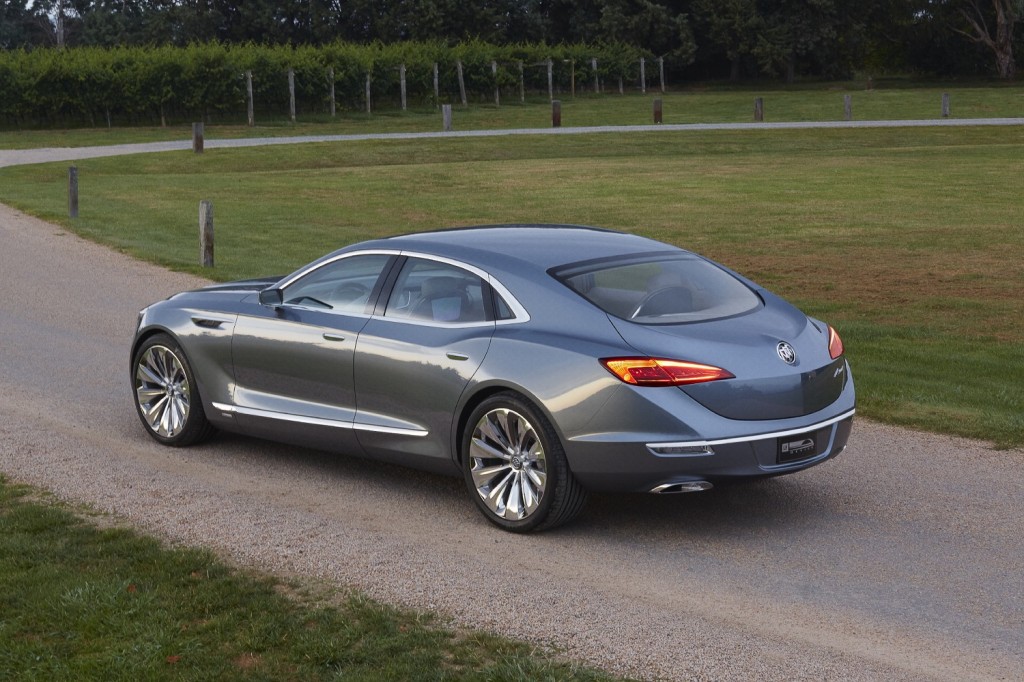 The sloping rear deck is classic 1963 Riviera, yet we still can’t get enough of that stunning sweep-spear. Integrated dual exhaust outlets and a license plate opening round out the stern

The tapered tail starts with the LED taillights, which also share the wing accent light seen in the headlamps. And just like the front fascia, the rear bumper cover features elaborate surface styling running from the exterior edges of the tail lamps. As is the case with the front fog lights, Avenir’s reverse lamps are placed at the outer edges of the rear fascia, mimicking the front with the chrome accent running the width of the stern. 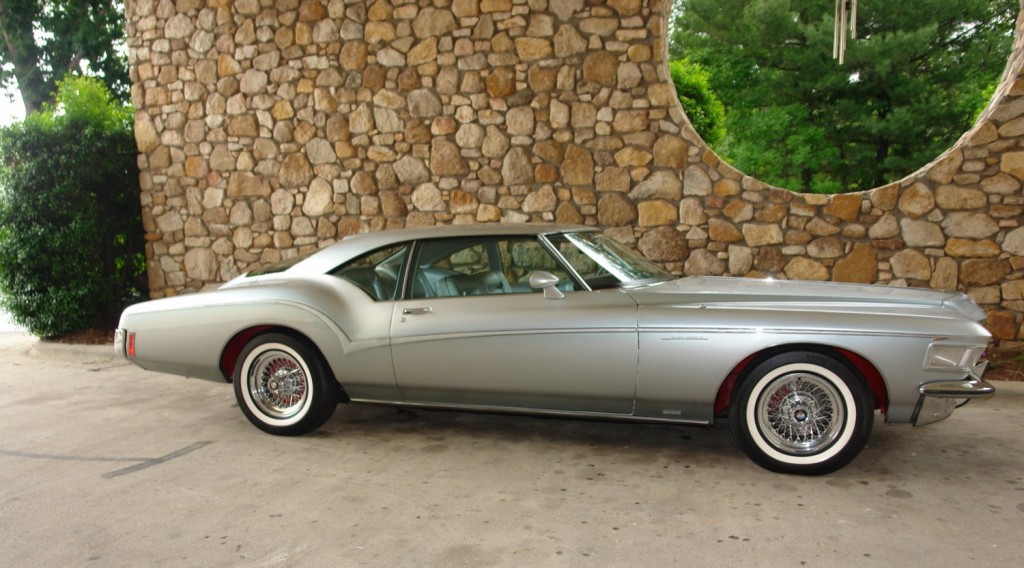 Rounding out Avenir’s rear is a pair of integrated exhaust tips and a license plate opening. 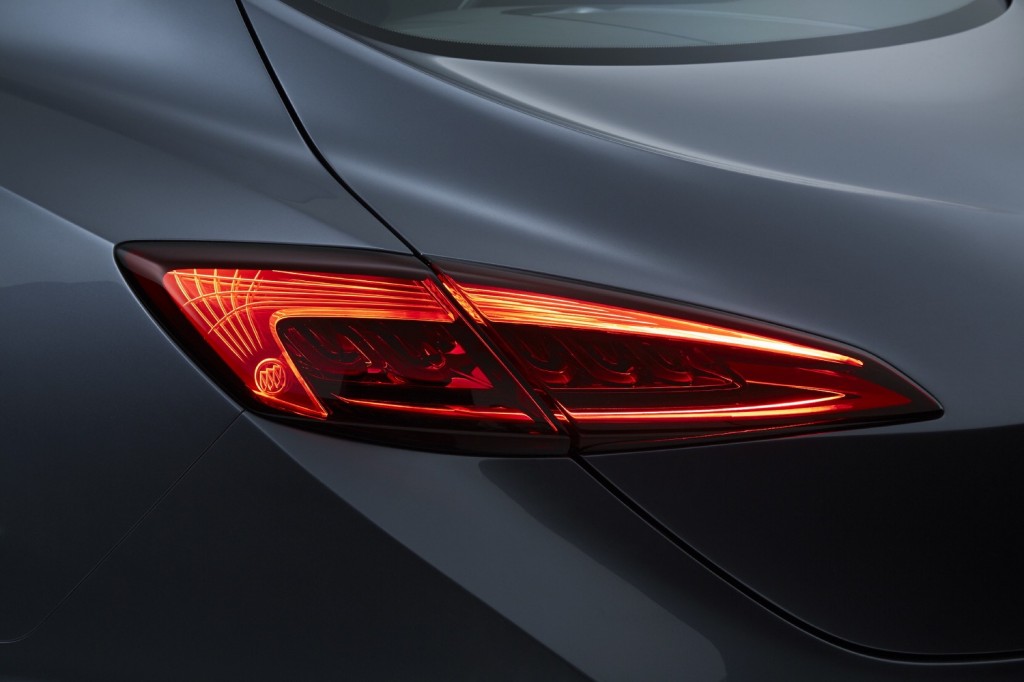 The wing makes its way to Avenir’s taillights

It might be difficult to see from first glance, but the Avenir concept wears a sophisticated color palette. Comprised of a Crystalline exterior color and strained use of bright work, the combination accents the concept’s body lines and sets up the interior in a warm and inviting fashion.

“Simply put, Avenir is a beautiful piece of sculpture, delivered on a premium proportion that acknowledges the Buick design heritage in a very progressive way,” according to Simcoe. “The vehicle remains unmistakably Buick with a modern take on the traditional Buick cues such as the sweep spear and boattail. The result is a piece of artistry that is precise in its character, beautifully proportioned. It really takes your breath away.”

And it’s certainly more beautiful than a Porsche Panamera, which — by comparison — looks like an unworthy turd.