Though somewhat conceptual in nature, the interior of the Buick Avenir concept isn’t a far cry from production. In fact, it features some elements that are in production Buicks today, and introduces others that serve as a sign of things to come.

“The interior is designed with the driver and passengers’ comfort and well-being in mind,” said Welburn. “Technology is seamlessly integrated and builds on the features that have become hallmarks for today’s production models – helping drive a new generation of customers to Buick.”

In general, the Avenir concept signals the direction of future Buick vehicles, which we are quite eager to see.

The Avenir gets the basics very, very right: its rear-wheel drive architecture (Omega) allows for a short dash and thin A-pillars, which contribute to optimal visibility, driver awareness, and optimal spacial efficiency. 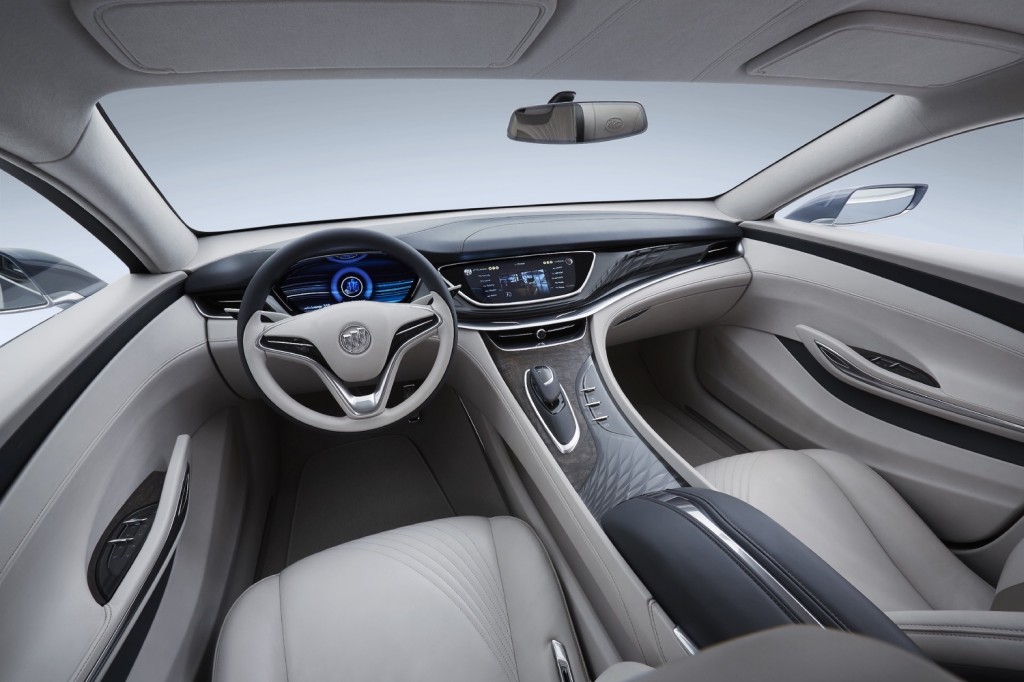 By comparison, the exceedingly thick A-pillars and extraordinarily long dash on the second-generation Buick LaCrosse, diminish outward visibility, lessen driver awareness in relation to the vehicle on the road, and reduce usable cabin space.

We believe that the “individual seating for four” idea is exclusive to the concept. So even if four seats do make it to production, it will be only as an option, rather than the standard configuration.

That should put to rest concerns with the lack of a rear bench seat… as if anyone ever sits in that rear middle seat, anyway.

We already know that the Avenir concept is based on GM’s Omega rear-drive vehicle architecture, the same platform that will underpin the upcoming full-size Cadillac CT6. So, assuming that a vehicle like the Avenir is produced, how will it be different from the CT6? 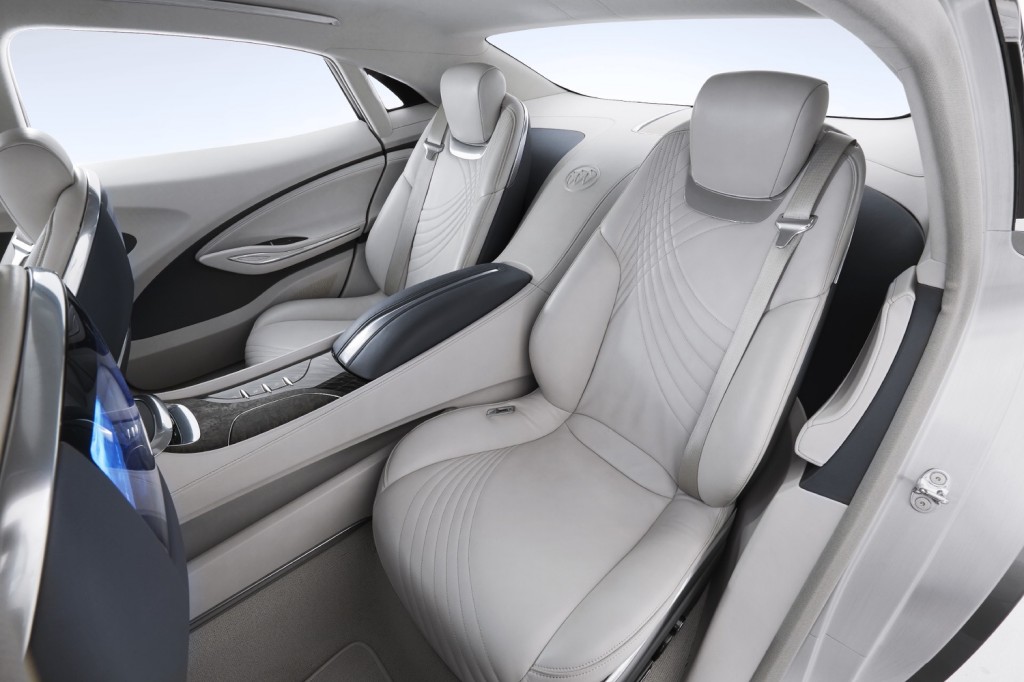 Quite soothing, wouldn’t you say?

The solution lies in finding the reason for a vehicle’s existence, itself a question that can often be answered by looking at an interior, which communicates the personality of the vehicle more so than other elements. So, while the Cadillac will still be luxurious, it will communicate the luxury in a sporty, performance-oriented (red-blooded) fashion. The Buick, on the other hand, will aim to provide — as the brand puts it — a “soothing environment”.

Overall, the Avenir’s cabin rewards the senses, makes managing technologies easier, and enhances the feelings of personal space and well-being. 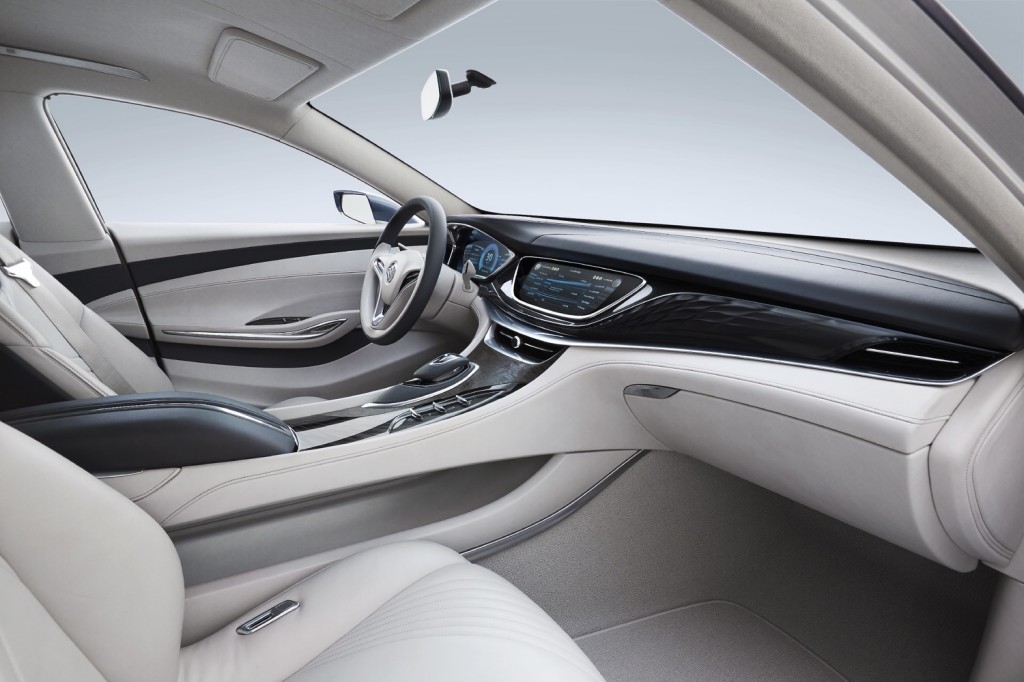 Flowing seamlessly through the cabin, Avenir’s interior surfaces were inspired by nature and sea waves receding on a beach. It is a motif seen on the seats and carried to other trim components – even the carpet. The patterned insert for the carpet carries the motif in silk and bamboo.

“There’s an almost-three-dimensional or bas-relief effect to the design motif that adds depth and heightens the sense of place,” said Wetzel. “Layered and floating elements such as the center console enhance the perception of lightness, efficiency and dynamism.”

Enhancing the Avenir’s ambience is a color palette of light and natural tones blended with oiled and buffed wood trim, and Galvano satin-chrome accents. 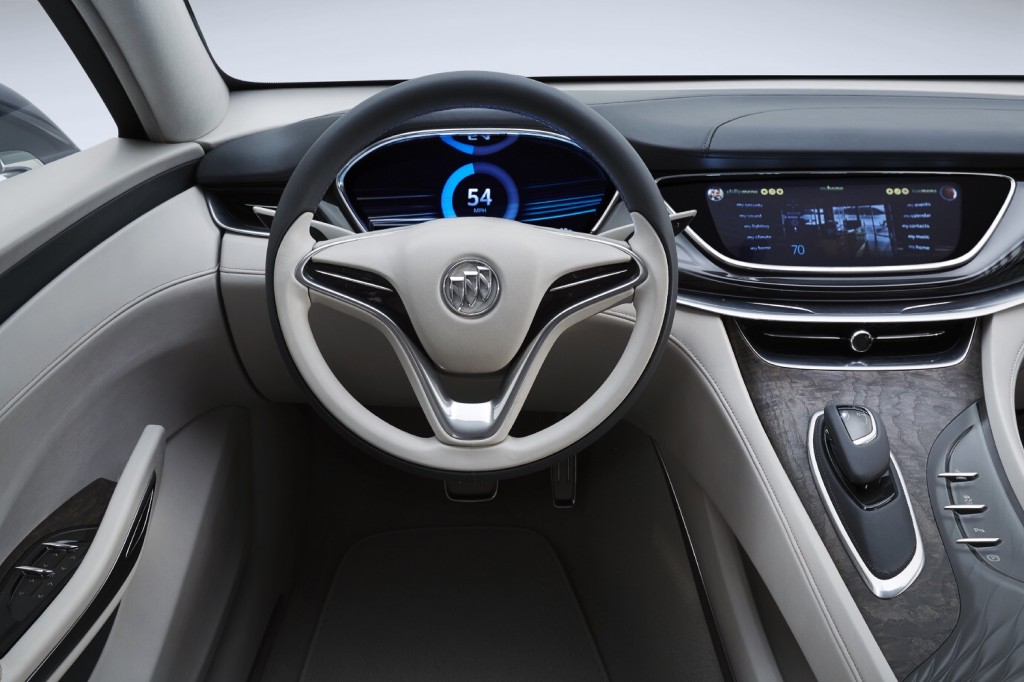 “The use of color, material, form and amenities can affect a person’s mood and feeling,” she adds. “The Avenir is a showcase of thoughtful and modern design with the capacity to anticipate and facilitate the personal needs of its occupants. It’s absolutely its own getaway destination.”

Look closely, and you’ll see that the Avenir concept features several design cues already present on contemporary Buicks. For instance, all Buicks on sale today feature a wraparound theme that runs from the front doors and into the dash. The motif is particularly exaggerated on the facelifted, second-generation LaCrosse. 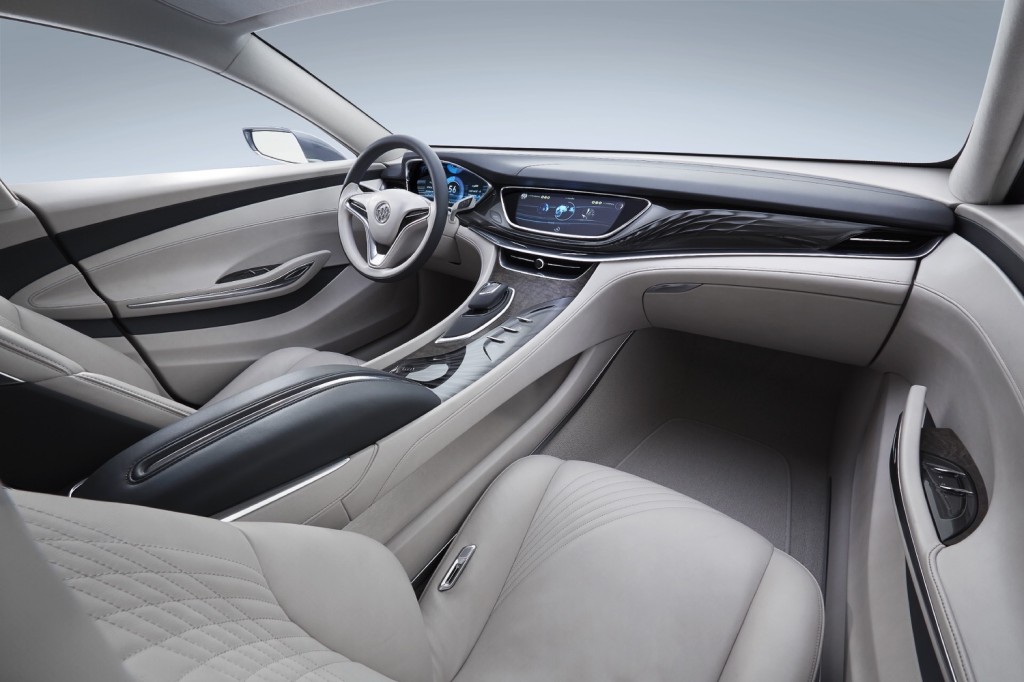 Notice the wraparound design from the front doors to the dash, as well as the seatbelt harness integrated into the seats

Other interior design elements on the Avenir are new to Buick. The seatbelt buckles, for instance, are integrated directly into the seats, making for a clean yet functional design. The center console runs the length of the vehicle and is indented, creating an ingenious shelf that can be used to place items such as smartphones and other tech gear. The gear shifter is digital, and isn’t so much a shifter as it is a joystick. There’s also a plethora of technology that we will delve into shortly.

We should note that during our time up close and personal with the Avenir, we didn’t see any handles with which to pull a door closed once inside the car. We found that to be slightly ironic, but we’ll chock it up to the Avenir’s conceptual nature.