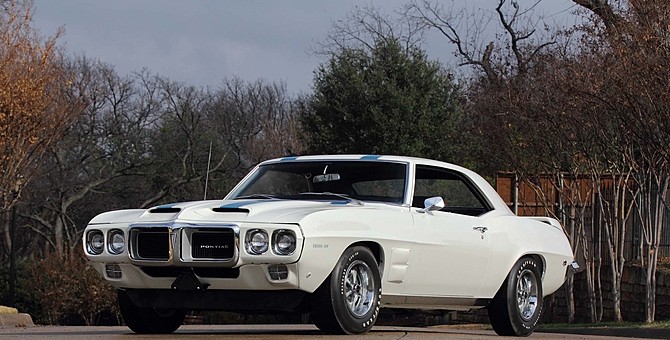 Pontiac introduced the GTO Judge and the Firebird Trans Am around the same time in the 1969 model year, but one was a success and the other was a failure. Care to guess which one was the latter? Indeed, even though the Trans Am became America’s favorite performance car a number of years later, the first Trans Am was a very poor seller. One of these rare cars will be at Mecum’s Kissimmee auction on Saturday, January 24, 2015.

The 1969 Trans Am was basically a Firebird 400 dressed in white with blue trim, a spoiler, special scooped hood, and the first step-up engine option. SCCA rules stipulated that a Trans Am racer needed to have a motor no larger than 5.0 liters, but the street-going Trans Am had a 400 − Pontiac had a tunnel-port 303 for racing. The 400 High Output with Ram Air − otherwise known as Ram Air III − was rated at 335 horsepower and came standard with a three-speed manual; optional transmissions for the Trans Am were a 4-speed manual (wide- and close-ratio) or three-speed automatic. For those wanting to go faster, the 345-horse Ram Air IV was available, but only 55 people ordered one. And if you wanted to see the sun, a Trans Am convertible could be yours, but Pontiac only produced eight, all with the RAIII. Unlike the Judge, any wheel combination could be ordered, so it was possible to have a Trans Am with plebeian wheelcovers.

When the model year was finished in December 1969 (remember, the 1970 Firebird had a mid-year debut), the Trans Am numbers were dismal: only 697 were built. There’s been some conjecture why sales were so poor when the Judge’s were so fine (almost 7,000), and some ideas are that the Firebird’s image was not able to rival the GTO’s, as well as the fact that the 400 motor was the antithesis of Trans Am racing. Whatever the case, the 1969 Trans Am has been a very popular collectible for years now. This one that will be at Kissimmee has the following features:

Showing just over 34,000 miles on the odometer (believed to be genuine), it has received a “sympathetic restoration” with the blue interior maintaining its originality. Mecum estimates it will sell for $125,000-$175,000.