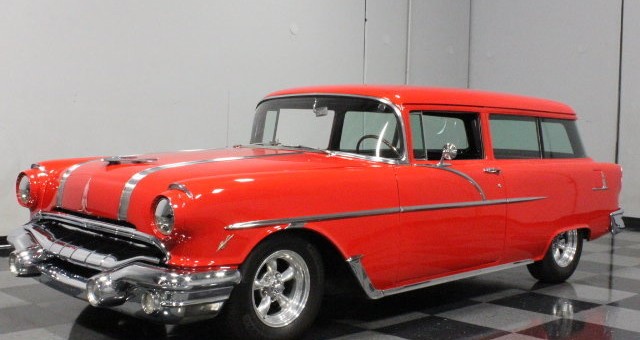 Chances are strong that you’ve never heard of the Pontiac Yeoman. No one could blame you; information about the car is scarce, far scarcer than for its Chevrolet counterpart (also named “Yeoman”).

But here’s this gorgeous 1956 Pontiac Yeoman wagon for sale on eBay, for the mere pittance of $47,995. For comparison’s sake, records show that a 1958 (Chevrolet) Yeoman sold for over $93,000 in 2012 at a Barrett-Jackson auction. We’re guessing this is a comparable car.

Says the seller: “Everyone will probably mistake it for a Nomad, but if you park them side-by-side, you’ll see that the Yeoman is just a bit bigger and when they catch on, they always smile just because it looks so right.” S/he approximates it to be roughly on a 9:8 scale with the Chevrolet Nomad, which was a handsome beast in its own right.

Loaded with power steering, air-conditioning, a three-speed automatic – all amenities that contemporary motorists take for granted – this 1956 Pontiac Yeoman is powered by a 350 cubic-inch V8, fed by an Edelbrock four-barrel downdraft carburetor. It’s shod in a delicious bright red color, while black vinyl wraps the interior. The seller writes that the interior “has a few red and white highlights to add a sporty look.”

For a super-rare car of this mint and level of preservation, the price truly makes this a bargain for the right collector. The obstacle is finding said collector when trying to sell a car that no one has ever heard of.