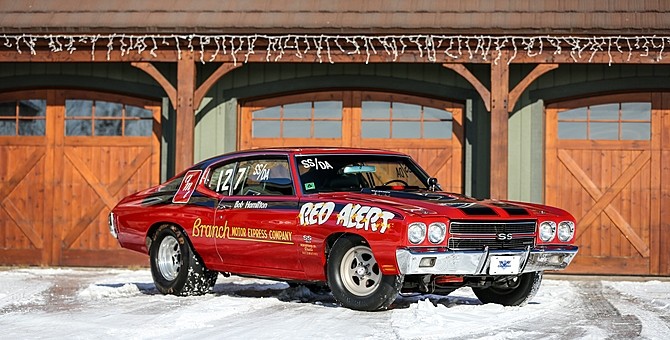 The January 2015 Mecum Auction in Kissimmee, Florida has a very special celebrity scheduled to strut across the auction block: the 1970 “Red Alert” Chevrolet Chevelle dragster.

The car began its long drag racing history in the hands of Bob Hamilton, who purchased the car new and began running it at the local dragstrip in 1971. It was sponsored by model kit company AMT – in fact, they went on to make a 1:25 scale model of the Red Alert Chevelle that would later become AMT’s best-selling model kit. It set a new SS/DA class record in 1972, and took home Top Eliminator in 14 out of 16 events in 1976 at Bradenton Dragway in Florida.

Following its dominion of Bradenton, the “Red Alert” Chevelle was sold to racer Terry Carney. A decade and a half later, Carney resurrected the car for use in nostalgia drag racing. It’ll run a low-ten at over 130 mph to this day.

The “Red Alert” is motivated by a 454 cubic-inch LS6 big block V8. It was factory rated at 450 HP – nearly 1 HP per cubic-inch, which was quite a lot for the time. That motor turns through a 2- or 3-speed automatic transmission, although the listing doesn’t specify which. Annoyingly.

This “Red Alert” drag racer Chevelle isn’t just a set of wheels. The term “storied vintage race car” doesn’t even come close; it’s a legend, pure and simple. And to keep the legend alive for its next owner, more relics are included: a bill of sale, build sheet, original pictures – even Bob Hamilton’s racing helmet.

This is a nostalgic dragster aficionado’s wildest dream.