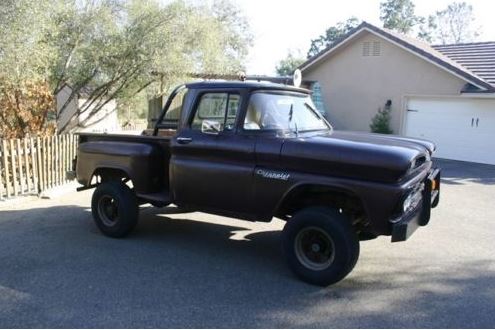 With the classic pickup truck market seeing a resurgence in both growth and value in recent years, finding a pickup truck for restoration or customization at a good price is getting harder and harder to achieve. On that front, this 1960 Chevrolet Apache Stepside pickup truck represents a rare opportunity for newcomers to the classic truck world, and could be a good long term investment in the long run.

When it first emerged in 1960, the C/K family of pickup trucks were the first major redesign for Chevrolet’s pickup truck lineup and was the replacement platform for the popular “Task Force” era pickups which were produced from 1955 to 1959. Unlike its predecessor, the C/K line of trucks were the first models to provide occupants with a more car like ride thanks to an independent front suspension, as well as a drop center ladder frame which helped make the truck lower than before. This particular example is a Stepside model which featured side panels in the inner wheel wells as well as a small step that helps improve access to cargo versus a conventional smooth side bed. The exterior of the truck is in fair condition, but it clearly wears the scars of 55 plus years of abuse quite visibly thanks to its broken driver side window, battered exterior paint, as well as the exposed metal in the door sills which will need to be remedied in the near future to keep rust at bay.

The interior is in decent shape for a truck its age with the expected amounts of wear and tear present. However, the bench seat does have a large gash in the leather upholstery on the drivers side, as well as several smaller holes scattered throughout which can be a bit expensive if the new owner decides to reupholster the seat with new hide. Thankfully the performance hardware is in solid order with a Small Block Chevrolet V8 providing the muscle while a four speed manual gearbox gives the driver plenty of interaction and involvement. As a bonus, the truck is also a “K” model which means it has a rudimentary but rugged four wheel drive system with manual locking hubs (“C” versions were front wheel drive).

With all the aesthetic attention that this truck needs, its not much of a surprise that it is currently going for a cheap $3,200 as of this writing. This is a good price for a vehicle in its condition, and is also the perfect entry level price for an enthusiast that is looking for a good beginner project but does not want to break his/her budget with a more extensive and potentially costly restoration effort.

You can check out the official listing here to see if this Apache and its “diamond in the rough” character has what it takes to add some hidden luster to your garage.