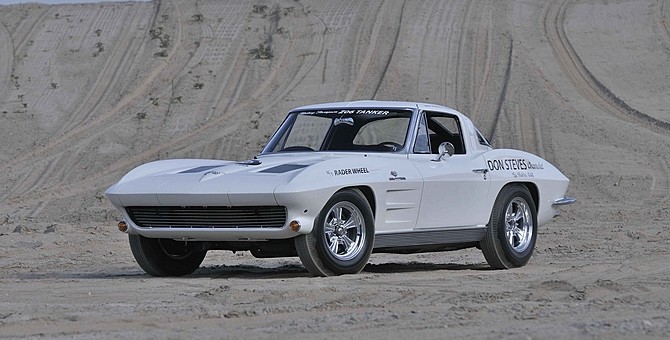 Two months before General Motors made the Z06 option available on the C2 Corvette, it sent out 15 examples of Z06-equipped Corvettes to various racing drivers and teams so they could field the cars in American and European races. The cars went to many famous drivers, including Dick Thompson, Don Yenko, Bob Bondurant, and more. But an incredible four Z06s were given to American racing celebrity Mickey Thompson, who also acquired one of the first four Z06 Corvettes to roll off the production line once consumer sales had commenced.

At the time, Thompson had five Z06 coupes, two of which were prepped for the Daytona Continental Three Hours and another two of which received modifications to compete in the Daytona American Challenge. The fifth, chassis number 6844, remained in stock configuration and was used by Thompson as his personal driver.

After collector Mike Pillsbury acquired chassis 6844 in the early 1980s, he thought it was used by Thompson at the 1964 Bonneville Speed Trials to test and promote Sears Allstate tires. But the car used to do that was actually the aforementioned Stingray that raced at Daytona. After finding Thompson’s Chevron credit card in the door, along with other evidence of personal use, Corvette experts concluded that chassis 6844  wasn’t used as a racecar, but rather as Mickey’s personal vehicle.

Now, the Z06 is being sold at the Mecum auction in Kissimmee, FL next month. The car is equipped with the original L84 fuel-inject engine, an m2 close-ratio transmission, an N03 36 gallon fuel tank, and even comes with Thompson’s old Chevron credit card. Check out the listing here for additional photos, and to read the entire story behind this historic ‘Vette.