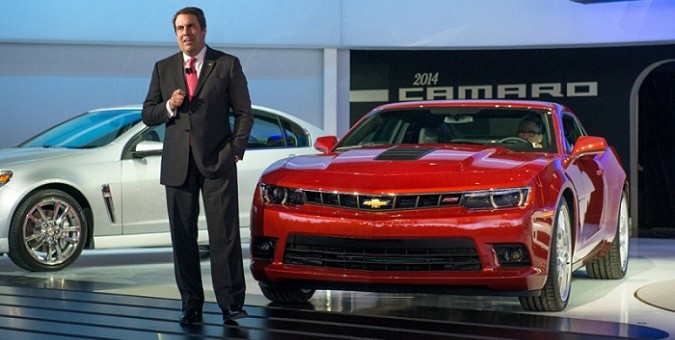 General Motors product chief Mark Reuss is ecstatic his new Chevrolet Colorado won Motor Trend Truck of the Year. A fact which is evident in his brief interview with the magazine, where he discussed the possibility of a diesel station wagon and the 2016 Camaro, in addition to his feelings towards taking home one of the most widely publicised awards for pickups.

MT recognized the Colorado as an “honest truck,” which Reuss says is exactly what he and his team were aiming for. GM entered a 2015 Chevrolet Colorado WT, Colorado Z71 and GMC Canyon SLT into the MT’s test, but Reuss says the best is yet to come for the Colorado and Canyon.

“It’s a good value — there is a good price difference between this and a big truck,” Reuss said. “And people are going to really want that. We’re just thrilled. Absolutely thrilled. By the way, you haven’t tested the baby Duramax, and you’re going to really like that.”

When the interviewer brought up the idea of offering a Cadillac station wagon, Reuss said a future wagon “may not be a Cadillac,” which is interesting, because he didn’t say “no” in regards to producing a wagon of some sort. We knew he was into the idea, but it’s refreshing to see it’s still on his mind.

Finally, Reuss discusses the next-generation Camaro. He explains the new car will be much better as the fifth-generation car was “a bit tortured from birth,” due to GM trying to make a Camaro from the Zeta chassis, which was originally developed by Holden for the Commodore. He says unlike the 2015 Mustang, the new Camaro “is not going to be heavier,” than the old car and also alluded to SS, ZL1 and Z/28 performance equivalents.