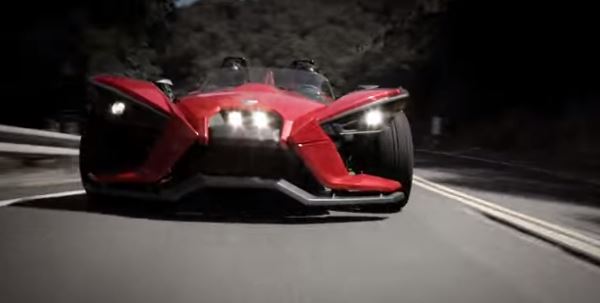 General Motors’ EcoTec 2.4L four powers the Polaris Slingshot, a 1,700-pound “cycle” that pairs the 173-horse motor with a 5-speed manual for some pretty swift acceleration numbers. The base Slingshot starts at $19,999 but choose the $23,999 Slingshot SL and you’ll get 18-inch forged wheels up front and a 20-incher out back, a small windscreen, a color touchscreen, backup camera, Bluetooth connectivity, and a 6-speaker audio system. But all that money talk means nothing to the residents of Connecticut, who aren’t allowed to buy one.

As reported by Autoblog, the Nutmeg State has decided that the trike didn’t fit its definition of a motorcycle, with the CT DMV going on record stating, “It is the consensus of the DMV that this vehicle closely resembles an automobile in appearance, and is equipped (brake, clutch, accelerator, steering wheel, four-cylinder engine, seat belt, gear shifter, etc.) and handles like an automobile rather than a motorcycle.”

The DMV suggests to work with the state legislature to “carve out a designation” for the Slingshot and “similar vehicles that are also attempting to enter the market in Connecticut.”

Says the owner of a Connecticut Polaris dealer, Damon Libby, “I don’t think this will be a problem. We have the backing of several senators and several representatives. It might take a little time, but it will come about.”

Polaris is still working with Hawaii, Indiana, and Maryland to give the Slingshot an opportunity to fall out of the gray area, with a Texas issue recently being resolved.