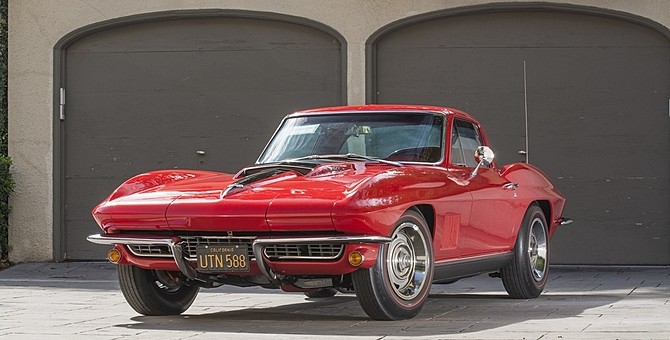 Rick Tavel runs Corvetted, a Corvette website that’s all about people’s love for Corvettes. The Corvette enthusiast has written for several Corvette internet sites and forums covering the Corvette as seen through advertising, as well as Corvette events, auctions, and investment guidance. Like before, and in the Christmas spirit, he wrote his fourth annual tribute to the car “that inspired many children’s dreams and aspirations” based on the famous poem “Twas the Night Before Christmas”:

Twas the night before Christmas, and who could forget
A full year of events for me and the Corvette.
My Corvette was stored safely in the garage
Safe from the onslaught of winter’s barrage.
The family was upstairs, asleep in their beds
While memories of the past year replayed in my head.

From the kick off in January, the L88 hammered sold
For Three Million Eight, a world’s record I’m told.
Barrett Jackson the place, an exciting event
The week I was there couldn’t be better spent.
The same week we learned about the C7 Z06
Not only a coupe but a vert for our kicks.

Then on to Daytona, for the first race of the season
Not to cheer the C7 would amount to high treason.
The Porsche took the checkered, BMW was next.
The Viper was third, was the C7 vexed?
Not the debut we’d hoped for, but Corvette fans knew
The competition was in trouble, they hadn’t a clue.
The team would bounce back and rank at the top
After sorting the C7 they couldn’t be stopped.

In February I went to the Corvette Museum,
Eight Vettes in a hole, I had to go see ‘em.
And who could believe such a hole in the floor
And the buried Corvettes at my heartstrings it tore.
But later we read the Vettes would return
Restored by donations and GM we learned.

Then on to Sebring, the second race of the season,
Results weren’t much better, there must be a reason.
A little more sorting to the C7.R
Would straighten things out, C7’s a star.
The prediction was right, the competition was cursed
The next four sanctioned events the C7 was first.

Texas’ Lone Star Classic kicked off a summer of shows
How many Vettes showed up, we may never know.
Every state in the nation had similar events
To showcase the Corvettes of ladies and gents.
Just how many shows and cruises attended
It’s hard to recall, please don’t be offended.

August was packed with shows, cruises and races,
Thousands of Corvettes in all types of places
From the Corvette Reunion and Back to the Bricks,
Corvettes on Woodward then Carlisle, a good mix.
Some time at the races, Corvettes on the track
And time behind the wheel that I’d never give back.

There was Back to the Fifties, don’t forget the concours,
And the NCM’s anniversary tours.
Then the fall was kicked off with maybe the best,
And the largest Corvette thing, known to all as FUNFEST.
Thousands of Vettes of all generations
Gathered from every state in the nation.
To party and celebrate and pay their regards
To the sixty one years of America’s sports car.

Corvette sales in showrooms were comparatively strong,
The first year was successful; on this I’m not wrong.
Over thirty five thousand rolled out Bowling Green’s door
And onto the highways, gathering stares by the score.
Crowds would form to admire the C7
A design clearly inspired by the stylists in heaven.

Things fell apart at the end of the season
For Corvette Racing, but there was a reason.
The team had won four events in a row
The C7s were faster the others were slow.
So IMSA stepped in, added weight to Vettes,
Reduced their restrictors, we wouldn’t forget
How IMSA unfairly slowed the C7s down
Preventing our team from winning the crown.
Protests, outcries and clear indignation
Directed at IMSA for unfair manipulation.

At the Lonestar LeMans around mid September
Another C7R was prepped to be a contender
In the six hour endurance FIA race
At the finish the C7 only took seventh place.

As the cool winter air turned the tree leaves to gold
Twas the best time for touring before the weather turned cold.
With the top down, we tackled the backroads and byways
The exhaust note blaring, as we barreled down the highways.
We roamed through New England, then South to the Dragon
The twisties and turnies had other cars laggin’
They just couldn’t handle the road like the Vette
A trip like no other that we couldn’t forget.

After that we turned our Grand Sport to the West,
Taking Route 66 to the Pacific, you guessed.
The Pacific Coast Highway was an inspiring drive
With the wind in my face, I felt more than alive.
A finale to a year of fun and celebration
For me and my Corvettes, the finest cars in the nation.

Looking back as the song says, “Twas a very good year.”
Especially for Vetteheads one thing is clear,
There is never a shortage of fun things to do
Races, shows, cruises, there’s something for you
To enjoy with your friends and your special Corvette
Every year just gets better, on that you can bet.

One last look at the photos that recorded the past
Then looked at the clock, Christmas eve had passed fast.
Christmas sunrise was just a few hours away,
As I glanced out the window I saw Santa’s sleigh,
That looked strangely familiar like a Corvette on skis
With a fat man driving as fast as you please.
He laughed, waved, and called out, causing a scene
” Happy Holiday to all and a Corvette 2015!”