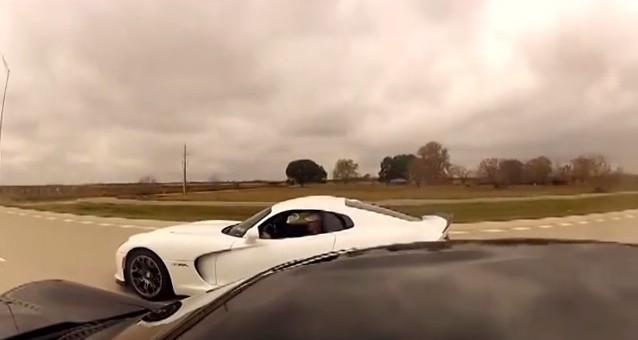 The Chevrolet Corvette and Dodge Viper are two very different sports cars, but that hasn’t stopped fans of each from butting heads over which is faster through the years. The last major Corvette/Viper showdown was Motor Trend’s C6 ZR1 vs. SRT Viper comparison test, which saw the ZR1 beat the Viper by nearly 2 seconds, prompting the creation of the faster Viper TA.

Deliveries of Chevrolet’s 2015 Corvette Z06 officially begun last week, and one curious Corvette owner decided to line it up against his friend’s Viper TA to see if it can take care of the snake the same way the ZR1 did. The Z06 is a little heavier than the 3,348 lb TA, weighing in at 3,524 lbs, but it has 10 more horsepower and 50 more lb-ft of torque, so you’d think this would be a fairly even match up.

The Viper, probably much to the Z06 owner’s dismay, walked away from the Z06 on all seven pulls, which were done from a variety of speeds in different gears. Both cars are manual examples, however the Viper only has six speeds to the Z06’s seven, giving it longer gear ratios and enabling the driver to spend less time shifting. The Z06 also appears to be equipped with the Stage 2 or Stage 3 aerodynamics kit, which produces substantial downforce at speed, affecting the car’s straight line performance.

The results of this test may be different once eight-speed automatic Z06 models begin to hit the market, but it will still be extremely close if the video below is any indication.