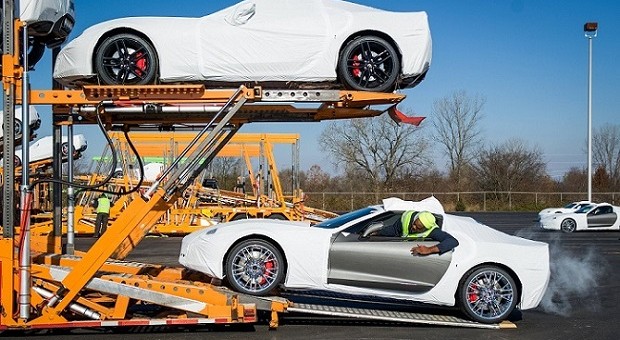 Those lucky individuals impatiently awaiting the arrival of their 2015 Corvette Z06 will be delighted to hear Chevrolet officially begun to ship the first examples of the 650 horsepower supercar today, just in time for the start of the Christmas season.

By now, the Z06 should need no introduction, but we’ll give you a quick rundown of the stats anyways. Its supercharged 6.2-liter LT4 V8 engine produces 650 horsepower and 650 lb-ft of torque. When equipped with the optional eight-speed automatic transmission, it will sprint from 0-60 mph in 2.8 seconds, and can also pull nearly the same G on the skid pad as an $845,000 Porsche 918 Spyder. It’s the most powerful, most technologically advanced Corvette ever produced, so you can understand the anticipation customers are currently experiencing.

“It has been an incredible opportunity to work on Chevy’s most capable model,” manager of the Bowling Green Assembly Plant, Jeff Lamarche, said in a statement. “It truly is an amazing car, and we’re thrilled to get them into the hands of our eager customers.”

The first run of Corvette Z06s will all be models equipped with the seven-speed manual transmission. The cars shipped today were all coupes, which will be followed by deliveries of convertibles and eventually, eight-speed automatic models. Chevrolet says it has already received 5,600 orders for the car, and that’s just for manual Z06s. Automatic Corvettes have historically sold in greater numbers, meaning the waiting list for the Z06 may be even longer than the standard C7 Stingray’s.