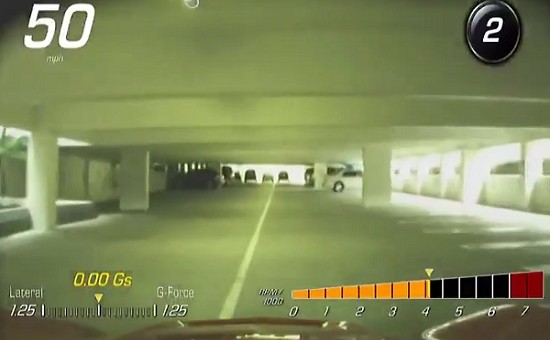 As soon as Chevrolet announced the ‘Valet Mode’ on the 2015 C7 Corvette Stingray, we had wonderful visions of 19-year old valets all over the United States getting busted for their antics in customer cars. The Valet Mode on the Performance Data Recorder locks the car’s storage compartments, disables the radio and infotainment systems and records the driver’s every action, allowing the car owner to review the valet’s actions as soon as it’s returned to them.

It didn’t take long for a valet to get busted treating a customer’s C7 badly. Jalopnik dug up a video posted by a Corvette Forum member who valeted his Torch Red C7 at the Segerstrom Center for the Arts in Costa Mesa, CA. The valet acts responsible enough at first, but as soon as he has some room, he punches the gas pretty hard and speeds up to 50 mph inside in a parking garage.

In addition to speeding in an extremely tight, confined space where pedestrians could be walking, the valet also appears to tap the ‘Vette’s nose off the concrete when he pulls it into the space. The owner of the car did what any of us would do upon reviewing the video, called the Segerstrom Center to immediately report the valet, who hopefully hasn’t gotten their hands on anything else this fast since.

You’ll notice the PDR footage doesn’t have any audio, which is the result of the system being deemed illegal in 13 states for violating wire-tapping laws. It’s illegal to record audio without consent, but not video, so as Chevrolet announced in October, setting the PDR in valet mode will disable audio recording functionality.