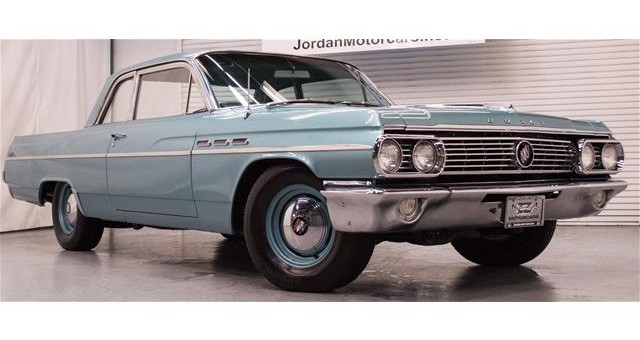 Back when Buicks were for dentists and their preppy kids, they commanded a presence like few cars did − handsome, solid, and torquey. Standard engine for their big cars was the “Nailhead” 401 in various states of tune, but for the entry-level LeSabre, it was 280 horsepower version with a regular-gas 265-horse version or the “Wildcat 445” with 325 horsepower as options. Like most cars of the time, a 3-speed manual was standard, but Buick’s Turbine Drive automatic or 4-speed manual were options.

Even though Buick was never considered an entry-level vehicle, when you see a LeSabre like this one on eBay, you can’t help but think that Buick built cheap cars. Yet compare this to a cheap Chevrolet and there ain’t a comparison: the Buick rides on a longer wheelbase, has a much bigger standard engine, and is trimmed nicer inside and outside. However, having a 3-speed manual is rather rare because − let’s face it − “when better cars are built, Buick will build them.”

So perhaps one of the more frugal folks of distinction bought this cheapest of Buicks back in 1963, but someone in more recent memory added a 2×4 intake and carbs from a later Nailhead 425 to this eBay LeSabre, making it somewhat of a Q-ship of sorts − it’s probably a 350-horse sedan as it sits. Speed-shifting a 3-speed on the column must be a unique experience, but otherwise this is a pretty neat nostalgia piece with Offenhauser aluminum valve covers, heavy-duty suspension and brakes, and dual exhausts (reflecting the upgraded motor) being some of the more noteworthy features. Currently it’s at $15,300 without meeting reserve, but if you visit the dealer’s website, you can see they want $32,950 − certainly there are better values that can be found for old-car fun.