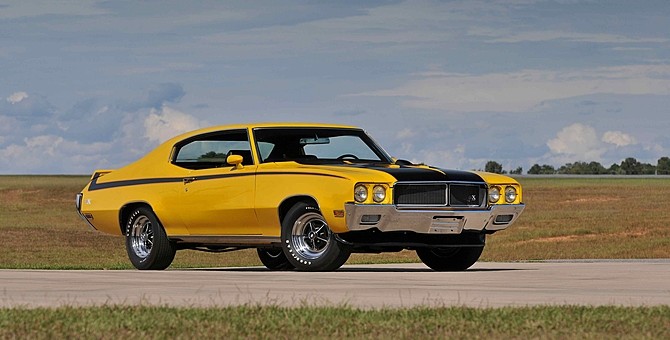 In 1970, General Motors brands Oldsmobile and Pontiac both had high performance models in the way of the 4-4-2 W30 and the GTO. Buick decided they too needed a performance car to inspire interest in the brand and generate showroom traffic, and responded with the 455 GS-based 1970 GSX.

The GSX package was available as an option on GS455 models and came only in either Saturn Yellow (pictured above) or Apollo White. The option added a front lip and rear spoiler, beefier suspension with Goodyear Polyglas tires, a hood-mounted tachometer and contrasting body stripes. This particular GSX was also equipped with the optional Stage 1 performance package, which added different cylinder heads, a more aggressive camshaft and a Quadrajet 4-barrell carb, among other mods, to the 360 horsepower 455 cu. in. Big Block V8 engine.

According to Mecum, this 1970 GSX is one of only 118 Stage 1’s ever produced with a Muncie 4-speed manual transmission. The car is well-documented with the original build sheet and title history, which indicate the car was sold new by Elliot Buick in Salem, Virginia. It was restored to concours-quality condition in 2007 and has sat in the Wellborn Musclecar Museum ever since.

If you’re interested in this rare GSX, keep an eye out for it at Mecum Kissimee in mid-January. Mecum predicts the car will sell for $175,00-$225,000 when it crosses the auction block, a significant yet unsurprising sum.