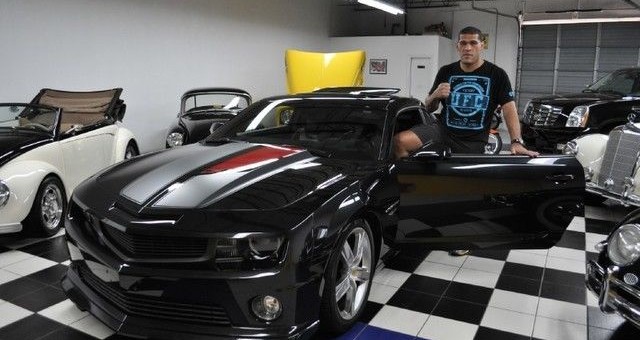 UFC personality Antonio “Bigfoot” Silva recently put his 2012 Chevrolet Camaro SS up for sale on eBay, for the low, low price of just $31,900. Regrettably, the car just sold at 12:45pm today, at the full list price.

2012 was the year of the celebratory 45th anniversary Chevrolet Camaro. But that’s a very small portion of what makes this example so instantly desirable. It’s an SS 2LT model, with the manual (read: “proper”) transmission, 6.2 liter V8, and only 10,112 miles on the clock.

And then there’s all the celebrity-mandatory razzle-dazzle. The car is loaded to the teeth with slick, mean ground effects, a moon roof, and according to website MMA Mania, it is finished in a menacing carbon flash metallic black paint job. What we guess we mean by razzle-dazzle is subtly impending street menace, as the car’s innate, commanding presence hasn’t been made juvenile by vinyl graphics, over-sized wheels, or anything else that might turn this black 45th anniversary Camaro into a caricature.

We wish that we could be reporting this eBay find under more ideal circumstances – namely, that the car were still available for purchase. But a slick 2012 Camaro at just under $32,000, owned by a notable UFC legend? Of course it wasn’t going to last.