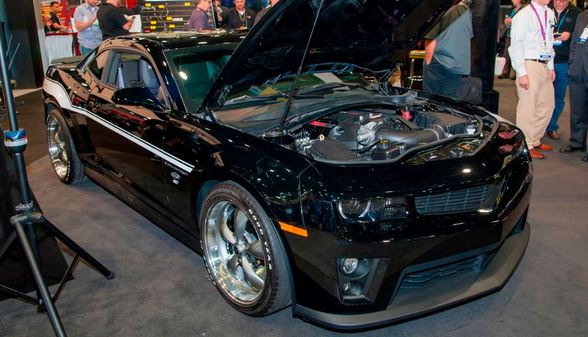 Any self-respecting Chevrolet or Camaro fan knows what Yenko is. The Pennsylvania Chevy dealership rose to fame after planting General Motors’ 427 V8 under the hood of first-gen Camaros, which was only officially available in Corvettes at the time. Yenko isn’t around anymore, but the legend will live on in this 2015 Yenko/SC 427 Camaro unveiled at SEMA 2014.

GM bought the rights to the Yenko name in 2009 and unveiled their 2010 Yenko Camaro prototype shortly after. Unlike that car, this fully-licensed Yenko Camaro will be available to order from Classic Industries and SLP, who collaborated on the project.

Under the hood is GM’s 7.0-liter LS7 engine which has been graced with an Eaton TVS 2300 supercharger system, giving it about 700 horsepower. The car will be available in both manual and automatic configurations, with manual cars receiving a dual-disc clutch assembly.

All Yenko/ SC 427 Camaros will be built to order through SLP. If you’re interested, you’d better pick up the phone, as only 50 examples will be made. This car is being touted as the first real Yenko since the dealership shut down shop, so demand could be significant.