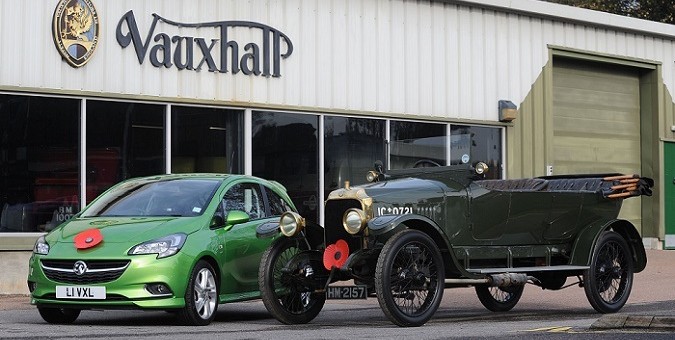 The Commonwealth Nations’ Remembrance Day, held Nov. 11, reminds citizens of the U.K., Canada and other nations recognize the members of their armed forces who have died in the line of duty. This year, General Motors’ British arm Vauxhall celebrated with a commemorative photo shoot of its D-Type Army Staff Car alongside the 2015 Corsa.

Vauxhall was one of the manufacturers which supplied vehicles to England during World War One. Over 1,500 D-Type Staff Cars were built for military use, one of which transported King George V to Vimy Ridge. A D-Type Staff Car was also the first vehicle to cross the Rhine after the Armistice in 1918. The car in the photos is just one of two surviving D-Type Staff Cars, and appeared in the Steven Spielberg film “War Horse.”

“We have released this commemorative photography to celebrate the centenary of the D-Type Army Staff car and as a mark of respect for those who lost their lives at war,” said Tim Tozer, Vauxhall’s managing director. “Each year we remember those who made the ultimate sacrifice in both World Wars, which included many Vauxhall and Bedford workers, as well as those who have died in recent conflicts.”

The D-Type Staff Car was saved from a London Scrap yard in 1946 and was then restored to its original condition. Today it resides at Vauxhall’s headquarters in Luton, Bedforshire, UK. The car is one of the oldest Vauxhall’s in existence, and is pictured here alongside the newest addition to the British brand’s lineup.