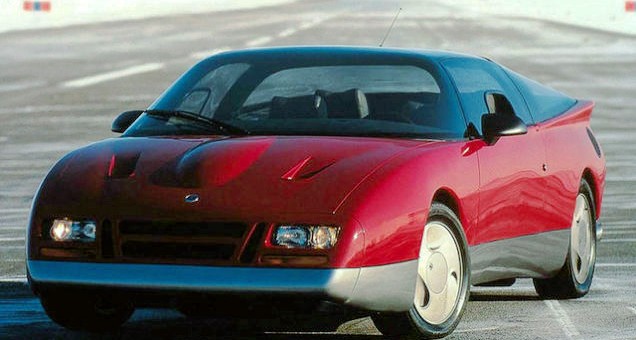 Hatched in 1985, the Saab EV-1 (Experimental Vehicle One) was a super futuristic glass-domed wedge-shaped 900 Turbo-based concept. It featured durable composite bumpers, the Saab 900’s new 16-valve Turbo engine, solar panels on the roof to power the fans while parked, and unbelievably, carbon fiber impact beams in the doors to offer extra bracing against inter-vehicular impacts.

The car was so futuristic, in fact, that it secured itself a cameo appearance in Back To The Future II as a car for the people of 2015. This is despite having been built a full four years before that movie was released.

Jalopnik reported on the wild, clairvoyant futurism that was this car, noting that it was equipped with 5-way adjustable electric seats from the Chevrolet Corvette, just a year before Saab’s corporate restructuring resulted in 50 percent of its stock being controlled by General Motors. Also prophetic, the Jalopnik folks correctly point out that the Saab EV-1 recalls the designs of the Saturn car company, which was also hatched by General Motors in 1985.

Are these two GM tie-ins coincidence? We have no idea. What we do know is that the Saab EV-1 is an oft-forgotten, advanced vehicle study, putting out 285 horsepower for a (then-blistering) 5.7 second zero-to-sixty time, long before that was cool.

In fact, everything about the Saab EV-1 came long before it was cool. And maybe that was the problem.