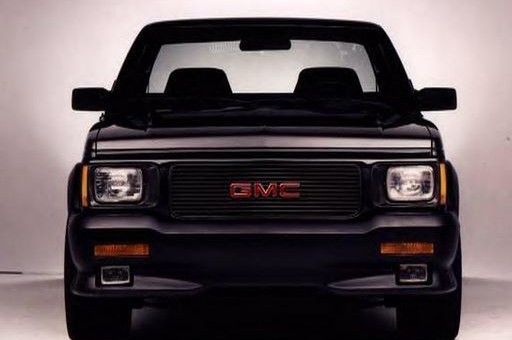 The GMC Syclone will, and has, gone down in history as one very iconic and special sport truck. There aren’t, and haven’t, been too many vehicles produced in the same fashion. Car and Driver has reached back into its archives, almost 25 years back, and graced us with a one-of-a-kind comparison test only the engineering of the 1990s could bring: the GMC Syclone vs. the Ferrari 348ts.

C&D uses a proper metaphor of a the GMC being a punk in a muscle t-shirt. It looks tough, but does it have the credentials to back itself up? Why yes, yes it does. Because, as C/D says, under that muscle tee was a time-appropriate 280-horsepower (which was underrated) from a 4.3-liter V6. Ah, but let us not forget the V6 had been turbocharged to 14-psi and liquid-intercooled. That power was delivered to a full time, four-wheel drive system and matted to a four-speed automatic. There was even a torque converter to make the best of the Syclone’s boost range, minimizing turbo lag. And we wish those chunky polished alloy wheels would come back into style.

From the land shaped like a boot, the Ferrari 348ts let America know it had swagger. Loud and proud, the 348ts showed up to the land of go-on-green with its four-cam all-aluminum V8 to challenge the homegrown pickup from Louisiana. To borrow a sound from C/D, the best way to describe the elegant noises the Ferrari makes in  type is clearly “Ripahh, ripahh. Riiiipahhhh.“

So the Syclone had the specs some sports cars of that period would have died for, and even had the exclusivity factor to match, with only 3,000 units produced. So, how’d it do?

Let’s just say the Ferrari gets a pretty good look at the tailgate of the Syclone before the 348ts enters its element and closes the gap. As the finishing marker approaches, well, you should check out C/D’s full write up for the final result.

25 years later, if you are a lucky owner of a Syclone, make sure you print a copy of this Car and Driver comparison test out. That way, you can tell your non-car buddies that your pickup truck isn’t just a “pickup truck.” In fact, in can take on some of Maranello’s finest.