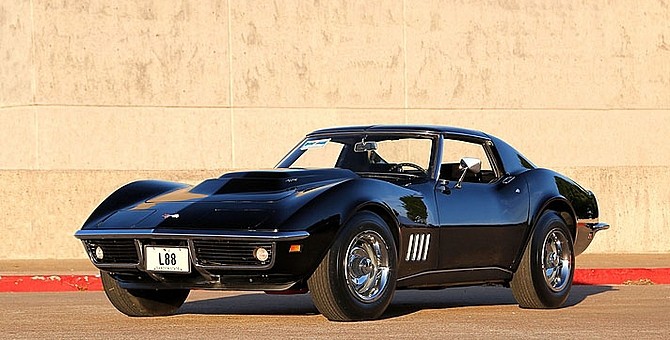 Any true Corvette fan understands the significance of L88 Corvettes. The L88 engine made your C3 ‘Vette ready to race from the factory, and due to the cost of the package, only 116 were produced in 1969. That makes it a pretty big deal when one goes up for sale, like this Tuxedo Black example is set to do at Mecum’s upcoming auction in Austin.

This L88 C3 may be more sought after than the Fathom Green example we featured earlier this year in June. We say this as this car has received the highly sought after Bloomington Gold certification and was invited to the 2008 Bloomington Gold L88 Invasion parade and event. Buyers may also warm up to the Tuxedo Black exterior paint and matching interior more than the unique Fathom Green.

As you’d expect from a Bloomington Gold Certified L88, this car’s drivetrain is all original. It has the same L88 427 V8 engine and 4-speed manual transmission as it did when it left the factory in 1969, which have racked up just 2,000 original miles in 45 years.

For the true Corvette aficionados, this car comes with all documentation and the tank sticker. There’s also judging sheets and certificates, restoration receipts, the owners manual and a letter from the service manager of Wigder Chevrolet in New Jersey confirming its delivery.

This low milage L88 should grab an easy six-figure asking price when it crosses the auction block at Mecum Austin next month. Check out the listing here for additional information and photos.