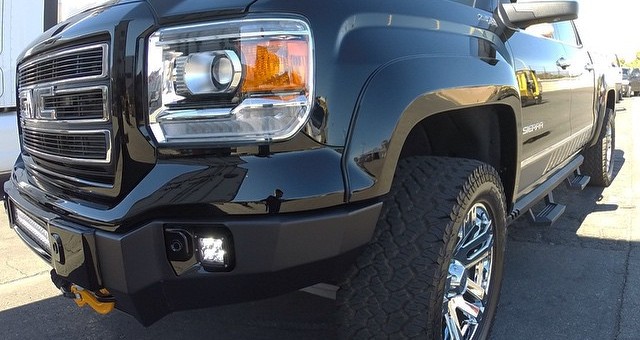 The photo above; that’s all we have to go off of for our earliest appraisal of a possible Reaper super-truck counterpart.

Well that, and the knowledge that the performance truck pictured above was teased on Facebook by one Lingenfelter Performance Engineering, the firm responsible for the 2014 Chevrolet Silverado Reaper.

The Silverado Reaper – as you’ll recall – is a fearsome, supercharged, performance-parts-clad answer to the Ford F-150 Raptor, though the package wasn’t developed and offered by the factory like Ford’s Raptor package. It features Fox Racing shocks, a skid plate, big 33-inch off-road tires, and puts out an astonishing 550 horsepower with the blown 6.2 liter V8.

It’s thus fairly safe to say that if LPE’s earlier performance trucks didn’t win us over, the Reaper sure as hell did. It is the baddest of trucks for the burliest of (wo)men.

So you can imagine that shoes left by the Reaper to fill are quite large. But then, the Sierra is essentially the same truck as the Silverado at its core, with no substantial difference besides the front end appearance. So long as this LPE Sierra can maintain the same level of performance, while perhaps eliminating the awfully juvenile side decals of the Reaper, this truck is an automatic home run.

This truck is currently at the SEMA show near the LPE booth. If you have the means, we seriously recommend checking it out.