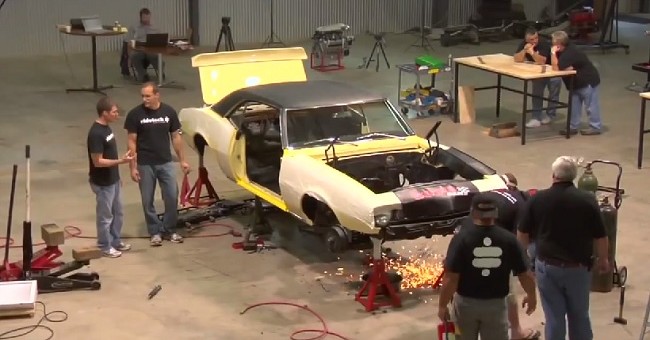 Building a modern day performance car out of a first-generation Camaro is no easy task. If you owned a ’67 Camaro and wanted a new engine and transmission dropped in it, along with all the necessary suspension and braking upgrades, you’d be waiting a long time before the shop you hired could deliver the car. Not all shops are Lingenfelter Performance Engineering, though.

In partnership with Ridetech, Holley, Falken, Comp Cams and several other companies, Lingenfelter put together a restomod 1967 Camaro in just 48 hours. They didn’t cut any corners, either. Under the hood is a Lingenfelter-tuned LS3 crate engine with a Comp cam and a Holley manifold and EFI system, which is hooked up to a Tremec T56 6-speed manual transmission.

The suspension is a full modern Ridetech setup with a Mosier 12-bolt rear end. There’s also Baer disc brakes at all four corners and lightweight Forgline GA3 wheels wrapped in Falken Azenis high performance rubber. The interior is topped off with a Ridetech TigerCage bolt-in rollbar, an AutoMeter dashboard and Recaro racing seats.

So how was Lingenfelter able to apply all these upgrades in 48 hours? Most of the parts are simple bolt-in modifications which take little time to apply. Installing simple prepared bolt-on mods such as these is a cake walk for the knowledgeable team of Lingenfelter engineers and mechanics who worked on the 48 Hour Camaro compared to the takss their used to facing day in and day out.

More information on the 48 Hour Camaro, along with photos of the build process, can be found here. There’s also a video below which partially documents the build process and features interviews with some of the Lingenfelter employees who built the car.